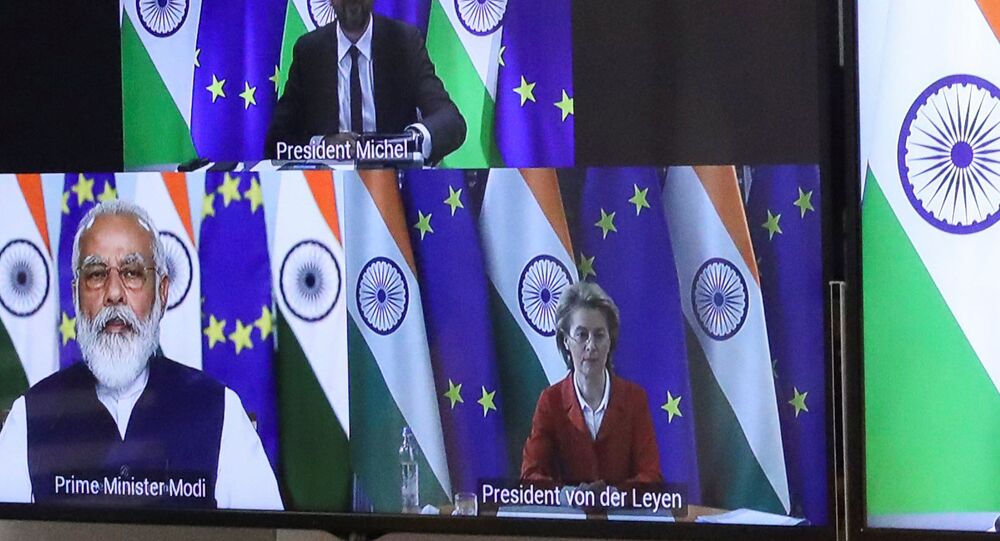 New Delhi (Sputnik): A Monday, the India and the EU sealed a nuclear cooperation deal, which allows for extensive ties, including in research and development. The deal was signed ahead of the 15th India-European Union Summit which began on Tuesday.

Indian Prime Minister Narendra Modi on Wednesday called upon democratic countries to take the lead towards solving the economic crisis that has engulfed countries across the globe as a result of the pandemic.

Modi emphasized the role of the “India-EU partnership in economic reconstruction and in building a human-centric globalization”.

"But with this high level trade and investment dialogue, we hope to advance things and to promote our common interest in moving forward towards a free trade agreement," von der Leyen, who was speaking from Brussels, told reporters.

India and the EU agreed to keep the global trading system open, with the WTO as the bedrock of a rules-based multilateral trading system and to step up cooperation to preserve, strengthen and reform the trade body.

The EU is India's largest trading partner, accounting for €80 billion worth of trade in goods in 2019 or 11.1% of total Indian trade, which is in line with the US and ahead of China (10.7%), according to European Commission data.

EU Relaxes Border Restrictions for 14 'Safe' Countries - What Does This Mean for Travelers?

EU Lawmakers Support India’s Kashmir Decision, but Back Talks with Pakistan for Peace in the Region