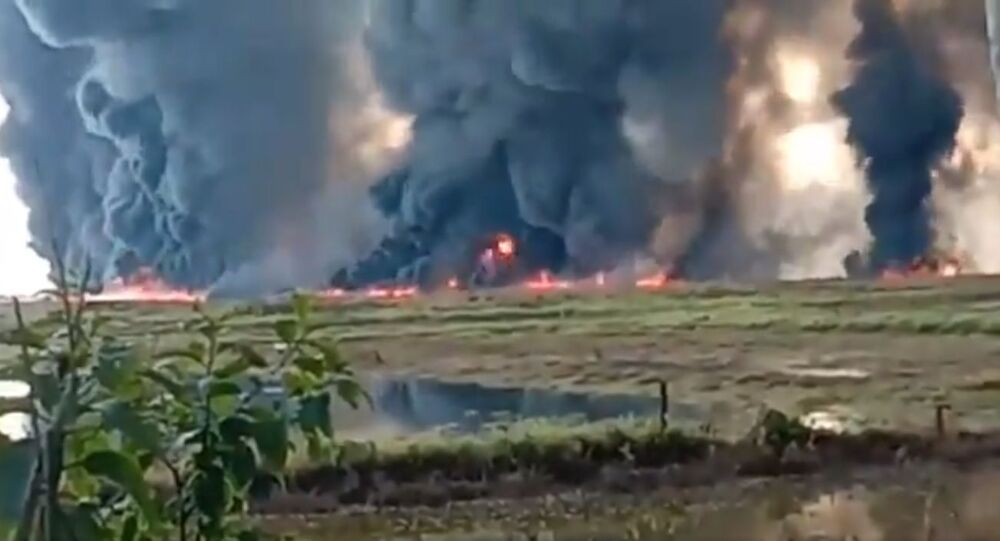 New Delhi (Sputnik): A fire at one of Oil India's most productive gas wells, which is located in an ecologically precarious area that is hope to a national park and tea gardens, has been a cause of worry for the locals, environmentalists and administrative authorities. The fire has also claimed the lives of two fire fighters.

Oil India said on Wednesday that the fire that broke out at the Baghjan Gas well in the northeastern state of Assam on 7 June has yet to be doused. People affected by the blowout have launched a protest, which has disrupted the functioning of Oil India's gas well.

"There is a factually incorrect information in circulation in some media about the dousing of fire at the Baghjan blowout well. The main operation for capping & killing the well has yet to begin. The well continues to be on fire," state-owned Oil India limited said in a tweet.

There is a factually incorrect information in circulation in some media about dousing of fire at Baghjan blowout well. The main operation for capping & killing the well is yet to begin. The well continues to be on fire. pic.twitter.com/2F3nlt3MaZ

​Nevertheless, the state-owned firm claimed that all the debris have been removed from the well site and “preparations are on for the well capping operation”.

The fire that broke out in Assam's Tinsukia district has severely impacted the livelihood of the residents of Baghjan village, who have been living in relief camps since the well caught fire and destructed their homes and property.

The environmental impact of the fire was also felt as the gas well is located less than a kilometre from Dibru Saikhowa National Park and 500 metres away from wetland Maguri-Motapung Beel, an Important Bird Area (IBA).

The location is also in close proximity to the famous tea gardens of Assam, 50 of which have already been affected. Assam Branch Indian Tea Association Secretary Madhurjya Barooah has also written to the local administration and industry department, seeking their support in resolving the issue.

Professionals from other countries such as the United States and the Canada have also agreed to work in tandem with a Singapore-based firm to help douse the fire.

Meanwhile, the well that has caught fire has also incurring an economic loss, as it is one of the most productive well that that oil India owns, operational since 2005. It was producing nearly 100,000 Standard Cubic Metre per day (SCMD) of gas.