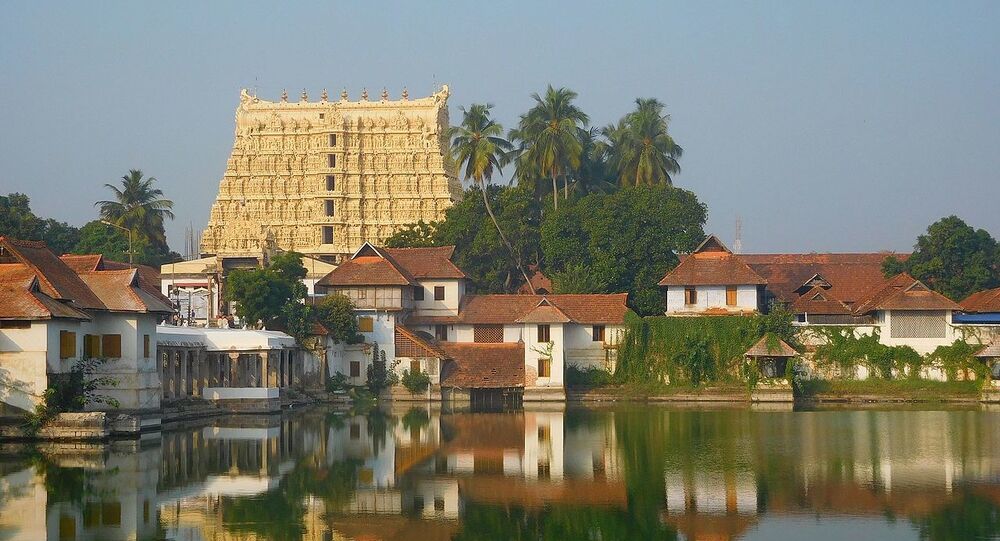 New Delhi (Sputnik): The historic Padmanabha Swamy temple was rebuilt in 18th century and managed by the Travancore royal family, which claims its secret vaults will unleash a mystical curse if opened. A decade-long legal battle over it was to assess whether the government would control India's richest temple or the Travancore family.

India's apex court on Monday held that the right of administration of the Padmanabha Swamy temple in Kerala will remain with the Travancore royal family.

A committee will be formed to manage temple affairs and a district judge will be heading the panel. The court has allotted rights of shebaitship to the family, which as per Hindu law is the legal right to property, idols, and managing the temple.

“Death will not affect the rights of shebaitship (property dedicated to an idol vests) of the family over the deity", ruled the court.

The treasures inside the secret vaults of the Padmanabha Swamy temple are estimated at more than $12 billion. It is also alleged that the treasure is being siphoned off from the temple.

The temple is claimed to be in possession of some Napoleonic coins, Roman-era coins, as well as huge gold bells.

The controversial case over the administration and management of the historic temple has been pending in the Supreme Court for nine years on the charges of alleged financial irregularities.

In January 2011, the Kerala High Court ruled that the state government should take over the control of the temple from a trust headed by the royal family.

The Supreme Court later held off on its verdict about opening Vault B of the temple until further orders.

Since 2011 five of the temple's six vaults have been opened and their contents recorded by a court-appointed team. However, the infamous Vault B remains unopened. As per the belief of the royal family the opening of the vault will lead to a catastrophe in the state.

The Travancore royal family has opposed the opening and examining of Vault B's contents. The family claimed that the vault has never been opened in over the years and is forbidden.

For past few years, petitions have been filed in different courts seeking government rights over the temple's wealth. Out of an estimated 90,000 temples across the country, over 400,000 are under the direct control of state governments, while there is no such control over Muslim and Christian religious bodies.

Recently, former minister and senior Congress leader Prithviraj Chavan argued that the federal government must utilise the $1 trillion worth of gold in temples across the country to deal with the financial crisis in the wake of the COVID-19 pandemic.