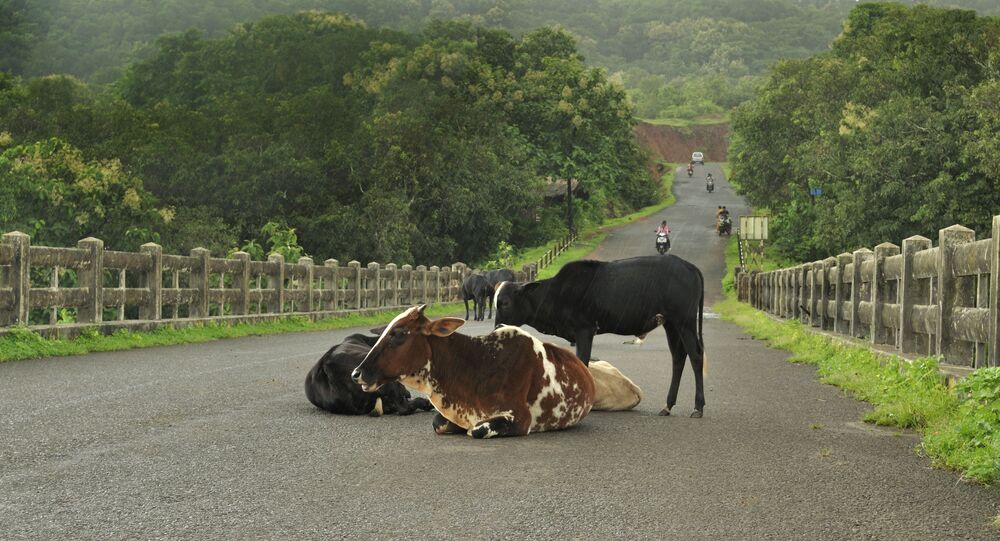 New Delhi (Sputnik): On Thursday, police officials from the Indian state of Madhya Pradesh shad arrested Vikas Dubey, the infamous gangster wanted for the brutal murder of eight policemen in neighbouring Uttar Pradesh. He was nabbed in the city of Ujjain's famous Mahakal Temple, after eluding dozens of special security teams searching for him.

A herd of stray cows and buffaloes led to a road crash which enabled the notorious criminal Vikas Dubey, who had been arrested for the killing of eight policemen, flee a police vehicle in the Indian city of Kanpur, a Special Task Force from Uttar Pradesh state revealed on Friday. He was shot and killed by police while attempting to flee custody.

The clarification came amid questions being raised about how a high-value criminal who'd had a bounty of $6,650 (INR 500,000) on his head could could escape custody, albeit temporarily.

The Special Task Force of Uttar Pradesh (UPSTF) had to neutralise the dreaded gangster while it was transporting him from Madhya Pradesh state to the city of Kanpur, Uttar Pradesh. He had fled to the neighbouring state to avoid special teams tasked with searching for him days after he and his accomplices brutally killed eight policemen who had gone to arrest him at his home.

© REUTERS / STRINGER
People stand next to an overturned vehicle which was carrying Vikas Dubey, accused of ordering the killing of eight policemen, near Kanpur, in the northern state of Uttar Pradesh, India, July 10, 2020

Flanked by policemen, he was just 20 kilometres away from Kanpur, following his arrest in Ujjain, when the accident occurred.

"The driver had been driving since night, and he was surprised by the sudden appearance of the stray cattle in the middle of the main road. While trying to avoid hitting them, he lost controlled of the vehicle and it overturned," The UPSTF explained in a statement reviewed by Sputnik.

It was stated that four policemen travelling in the same vehicle with Dubey suffered serious injuries and were left unconscious for a while.

"The gangster tried to take advantage of the situation and fled the police vehicle after stealing a gun from a policeman," the statement said, adding that it was policemen in the other vehicles in the convoy who saw Dubey fleeing and pursued him.

"Dubey fired upon them as they tried to capture him alive. But in self-defence, he was fired upon and suffered injuries. He was rushed to a hospital but was declared dead by doctors," the statement read, adding that some policemen had also been injured in the gun battle.

On 3 July, Dubey, an organised crime figure who had avoided conviction in various murder cases through his political connections, was tipped off by local policemen about an special security team raiding his home in Kanpur. He and his accomplices killed eight of them during the botched ambush and fled, prompting a state-wide police manhunt.