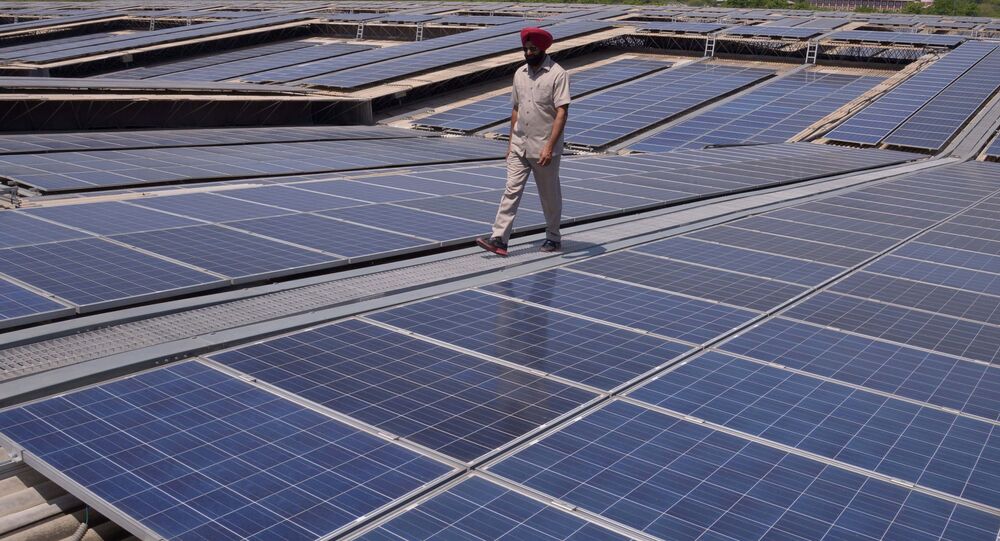 New Delhi (Sputnik): India had set a target of 175 gigawatts (GW) of non-fossil fuel generation by 2022, of which 100 GW was solar energy. Indian Prime Minister Narendra Modi also took an initiative to get the world to tap into solar power, in a bid to mitigate climate change and global warming.

Indian Prime Minister Narendra Modi on Friday unveiled a 750 MW (Mega Watt) solar power plant in Rewa, Madhya Pradesh. The project is billed as the largest solar plant in Asia. Inaugurating the project, Modi said, development and the environment were complimentary to each other and solar power was the best option to protect the environment.

“We are debating about self-reliance and development. Economy is a key part of development. Policy makers across countries are in a bind, between the economy and environment. For us in India, environmental protection is not limited to some projects, but it is a way of life", said Modi, while inaugurating the project through video conferencing.

The prime minister said 24 percent of the electricity generated at the Rewa Solar plant would power the metro network in the national capital Delhi. He said that besides Rewa work was in progress on several other big projects in solar power at Shajapur, Neemuch, and Chattarpur all in Madhya Pradesh. Modi also stressed capacity building in the manufacture of photo-voltaic cells, storage batteries, etc. in the country to meet the burgeoning demand.

"We cannot achieve our targets in solar power, until we have capacity to manufacture quality solar panels, batteries, and storage capacity. Now are work is going on very fast in this direction", said Modi.

But not many working in the field of solar power generation shared the PM's optimism.

Lakshey Sehgal, a solar entrepreneur said “India needs to remove execution bottlenecks in the rooftop sector to achieve the national target". He said many manufacturers have invested in photo-voltaic cells and Vietnam could be an alternative source of supply, as imports from China have come to a standstill.

Another entrepreneur in solar power projects felt the environment was favourable for Indian manufacturers to scale up their production, as China is being marginalised.

"100 GW target (by 2022) is unlikely to be achieved as India faces short-term uncertainty due to various taxes and levies on solar products and import disruption from China", Aditya Bhatia, Director of Infinity Vital, a renewable energy and engineering company, told Sputnik .

Bhatia said that if India is to achieve the target, solar power generation should be broad-based, with local bodies encouraging household generation of solar power with favourable policy intervention.

The International Solar Alliance was launched by Indian Prime Minister Modi and former President of France Francois Hollande during the COP-21 conference on climate change in Paris in 2015. It was conceived as a coalition of solar-resource-rich countries to address their special energy needs. It currently has 86 members and seeks to mobilise investment of more than a billion dollars in solar power generation through capacity building, innovation and research and development by 2030.