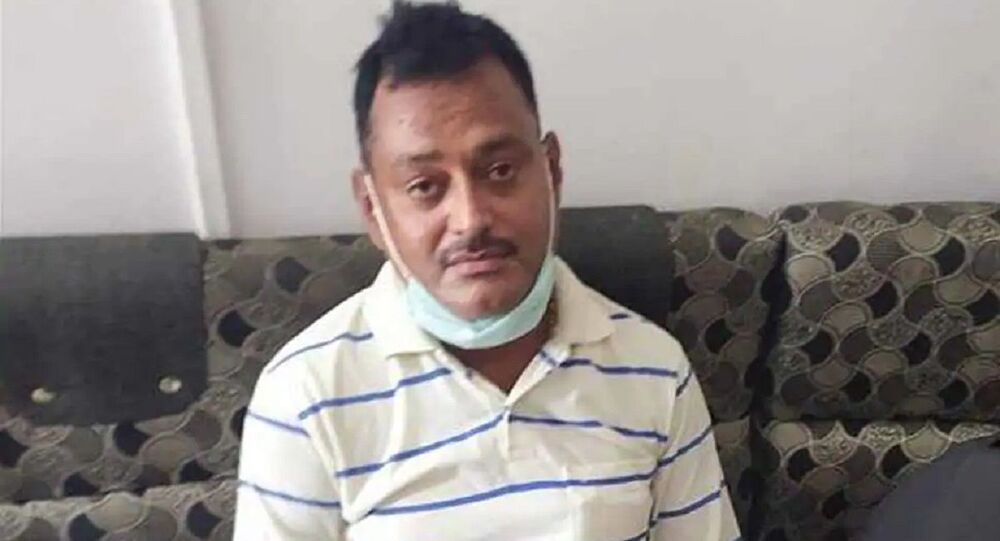 New Delhi (Sputnik): On Thursday morning, dreaded criminal Vikas Dubey, wanted for the murder of eight policemen, was arrested after a nearly week-long chase in India’s Madhya Pradesh. According to the police, he had come to the city of Ujjain to offer prays when he was nabbed by law enforcement.

Indian gangster Vikas Dubey, arrested in Madhya Pradesh’s Ujjain on Thursday for the murder of eight policemen, was killed in a police encounter on Friday morning while trying to flee custody.

According to the police, Dubey was being brought to Kanpur district from Madhya Pradesh for investigation when one of their vehicles in the police convoy overturned.

“Dubey tried to flee by snatching the pistol of a injured policemen after the car overturned. He was asked to surrender but instead he fired on the police party. In retaliatory firing, he got a bullet injury and was rushed to a nearby hospital", a senior police official from the Kanpur district said.

Police have since revealed that Dubey succumbed to his injuries and was declared dead by the hospital authorities.

Visuals of Gangster Vikas Dubey being taken to the hospital. He can be seen lying unconscious on the stretcher with blood stains. Official sources reveal he is no more. #VikasDubey #vikasDubeyEncounter @Uppolice @uppstf @myogiadityanath pic.twitter.com/iq8E5cEXOY

On 3 July, as many as eight police personnel were killed while raiding a wanted criminal, Vikas Dubey, and his associates in India’s Uttar Pradesh. The incident took place at a village in the Kanpur district where the gang was said to be hiding out. Dubey had a bounty of $6,650 (INR 500,000) on his head.

According to police, Dubey, who has over 60 criminal cases including murder, extortion, rioting, etc, was allegedly tipped off about the police raid by local policemen following which he had set up an ambush.

After the killing of eight policemen, Uttar Pradesh’s state chief, who has been working on cracking down on criminals since coming into power in 2017, had stated that the sacrifice of the policemen would not be in vain and that they would soon find Dubey.

Yogi Adityanath, since taking over as chief of Uttar Pradesh, has supported police encounters to curb crime in the state. In his first year in office, over 1,000 encounters took place in which around 100 alleged criminals were shot down by police. Despite facing severe criticism from human rights group, the monk leader did not stop his policy against criminals.