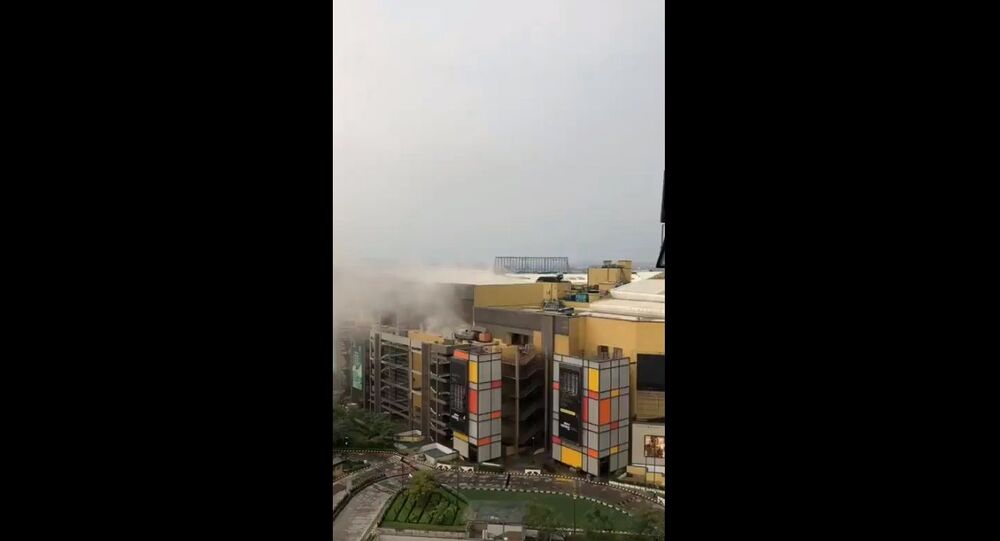 New Delhi (Sputnik): Indian cinemas have been shut for over three months now as part of measures to contain the spread of the coronavirus. Cinemas were among the first public spaces to be closed, even before the nationwide lockdown began on 25 March.

A video of a cinema roof collapsing in a popular mall in Noida has gone viral on social media, with locals raising the alarm by calling the police.

Police confirmed to have received several calls from locals about the roof collapse at the “DLF Mall of India” after the video was widely circulated on Twitter. The mall authorities, however, clarified that it is a “one-month-old" video of renovation work, which was carried out in June.

The video, recorded from a high-rise building, shows a cloud of dust emerging from the top of the building as the roof crumbled.

Netizens appeared uncertain whether it was an old video or an accident that took place recently. Some even suggested that the mall would remain closed for an "indefinite" period of time.

Looks like it's under renovation and it was deliberately done ..
All Is Well as per the authorities !

Breaking DLF Mall of India, Noida will remain shut for indefinite period, cinema roof collapse.
Structures stability of many buildings in Noida are doubtful. I had pointed it; earlier. ⁦@CeoNoida⁩ ⁦@dmgbnagar⁩ I’m warning again we are seating on potential bomb pic.twitter.com/sK9ltwIKbf

This MOI video is from last month.

Meanwhile, as cinemas continue to remain closed despite the phased unlocking of the country from 1 June, the Multiplex Association of India has urged the government to allow the gradual unlocking of cinemas across the country.

The federal government has also announced it would soon come up with a standard operating procedure to resume film shoots in India.

'End of an Era': Bollywood's 'Mother of Choreography' Saroj Khan Passes Away at 71

India Blacklists Pakistani Organiser of Bollywood Events in US