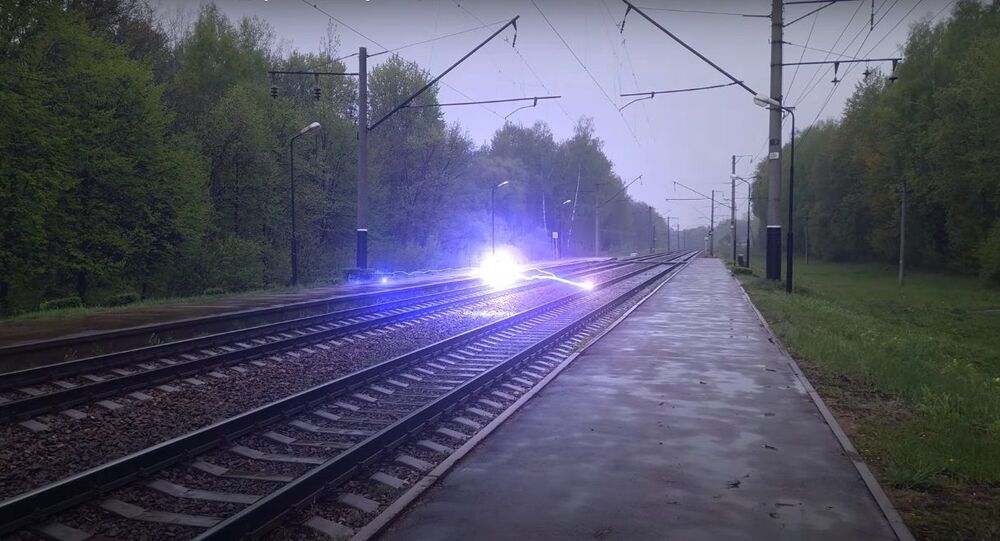 New Delhi (Sputnik): Followers of a Twitter account dedicated to physics and astronomy lovers, debated the authenticity of the video, with many saying that it was proven fake ages ago.

Indian physics enthusiast Manish Verma, an administrator of a science-friendly Twitter page, has startled his 150,300 followers with a seemingly frightening video clip that turned out to be both old and fake.

The clip posted by Verma, who goes by the username @zonephysics on Twitter, showed a lustrous blue light emerging from a forest-like area, crossing railway tracks, and then disappearing into thin air.

​Posting the ghostly video, the science-friendly page introduced its followers to the phenomenon of "St. Elmo's Fire".

Named after the patron saint of sailors, St. Elmo’s fire is actually a weather phenomenon in which luminous plasma is created by a corona discharge from a sharp or pointed object in a strong electric field present in the atmosphere, such as those generated by thunderstorms or created by a volcanic eruption.

From time to time, the phenomenon was witnessed by sailors at sea, especially during thunderstorms. Sailors regarded the glorious St. Elmo’s Fire phenomenon as a good sign from their patron saint.

Netizens reacting to the video debated the authenticity of the video, with many saying that the author of the original clip, which was first uploaded on YouTube last year, explicitly pointed out in the caption to the video that it was computer-generated imagery.

Many agreed that St. Elmo's Fire is spooky in itself, while others noted that even if the video were real, it would've captured a different phenomenon, called ball lightning, as these two are very often confused with each other. Others simply commented with funny GIFs and memes.

It’s not the phenomenon we call fake, it’s the video !
Real St. Elmo fire doesn’t even remotely looks like that !

I knew that Elmo was alive🧐🧐 pic.twitter.com/abwyvKFT0T

clearly Skynet just sent a terminator back through time? pic.twitter.com/4Votvr2AgU

The phenomenon you described is something that can actually happen, but the video you took to illustrate it is a deep fake that’s been debunked countless times !