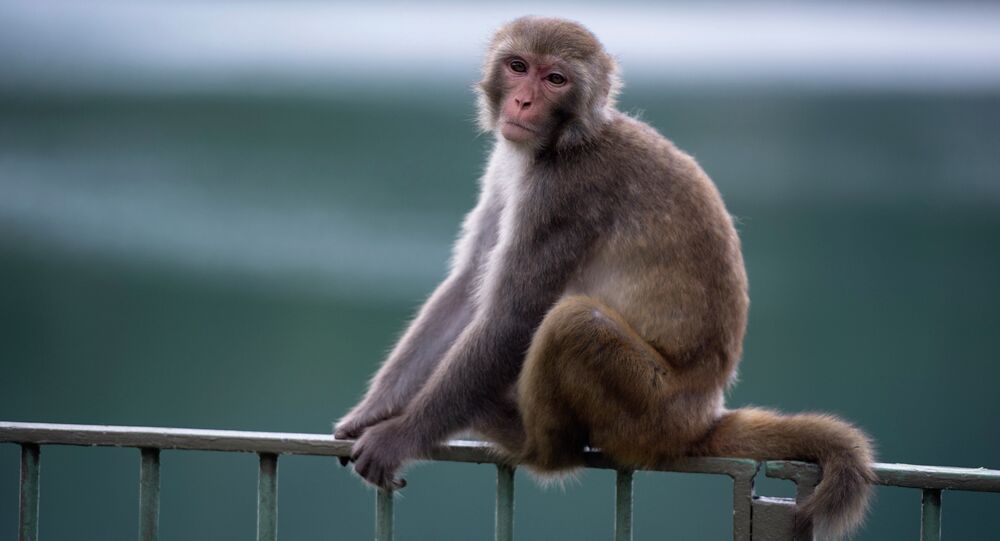 New Delhi (Sputnik): India’s most prominent Animal Cruelty prevention law was enacted in 1960 and never amended to strengthen the law. But from killing elephant by feeding them with explosive-laced fruit to various incidents of stray dog torture, the plight of animals remains largely neglected.

In a barbaric incident of human brutality to animals, a monkey was hanged from a tree in India’s Telangana state. A video of the incident, filmed by the accused themselves, has gone viral on social media.

The video shows the hapless monkey struggling while it's hanged with dogs on the ground howling.

Three men attacked monkeys with sticks when they entered their teak plantation. One of the monkeys fell into a water tank, as it tried to escape the beating. The incident was reported in Ammapalem village in Khammam.

The accused, identified as Sadu Venkateshwar Rao and two others then hanged the monkey to the tree and filmed the video as the monkey struggled.

The incident has triggered an uproar on social media, with users lashing out at authorities for not implementing stricter punishment to offenders.

More so, as in India monkeys are even worshipped as gods in the Hindu epic Ramayana which shows Lord Hanuman - half monkey, half human - as a central character.

Are we seriously out of our mind? Monkey was hanged 😭 Brutality heights. Telengana worshipped Lord Hanuman one side and other side such ppl co-exist. Animal act has to be equally treated as Human crimes.#Revisionofanimalact pic.twitter.com/0muyH04Q8i

While several were shocked by the sheer brutality of the incident, others requested the government impose a strict punishment on the accused.

A monkey has been hanged brutally by few people .where it is fell into water ,It has been taken out of it and hanged from the tree by few guys in khammam dist telangana. @KTRTRS @KTRoffice @TelanganaCMO please do justice by taking action against those who have committed offence. pic.twitter.com/TOL8V59KBv

With such cruelty this monkey was hanged and killed..I am shocked and in pain just see the video..how people are becoming inhuman and heartless..Such a shame our world has become..These ppl r murderers..let the world knows abt dem..Nab the culprits😡😡 Sick#monkeyhanged pic.twitter.com/yjqqhmjedm

Earlier in May, India witnessed widespread disgust over the death of a pregnant elephant. The elephant was fed with a pineapple containing firecrackers in Kerala. The firecrackers exploded in her mouth and the elephant died on 27 May standing in a river.

Covid-19: India to Allow the Export of 5 Million PPE Kits Per Month