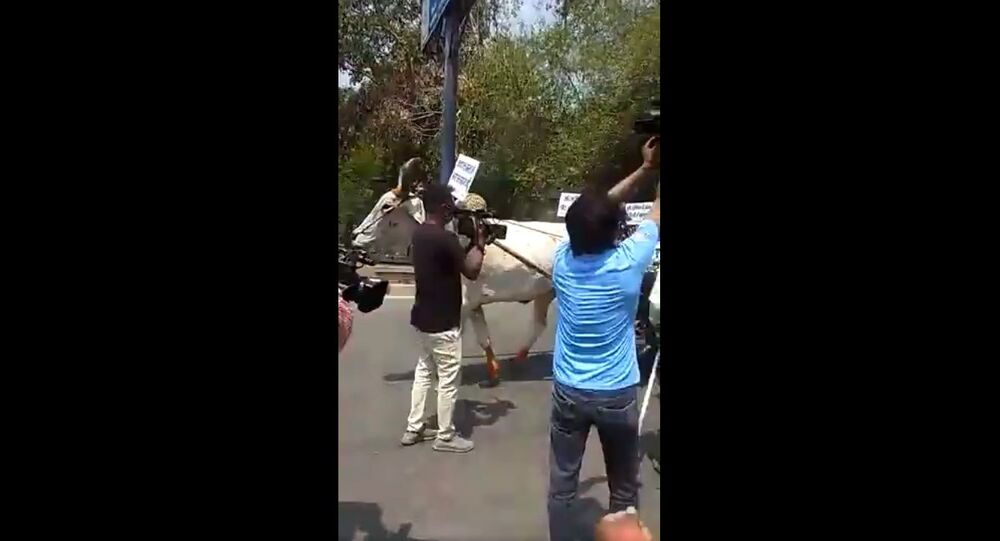 New Delhi (Sputnik): Diesel costs more than petrol in Delhi for the first time as state-owned oil companies raised prices for the 19th day on Thursday. Diesel has now breached the INR 80.20 ($1.06 ) a litre mark, while petrol reached INR 79.92 ($1.056) per litre, as per revised rates.

As India witnessed another record fuel price hike this week, protesters have come up with unique ways ofing show their dismay. Protesters in the national capital Delhi gathered, with an Audi being pulled by a bullock cart. Demonstrators marched alongside the Audi shouting slogans and holding placards.

The unprecedented price hike has triggered protests by opposition parties and the public in various states across the country as they called out the federal government for letting state-owned oil companies increase fuel prices without securing permission from the authorities.

In Guwahati, members of the Assam Pradesh Congress Committee (APCC) staged a sit-in demonstration against price hike for petrol and diesel.

In protest against diesel and petrol price hike, @yadavtejashwi leads a crusade while riding a cycle in Patna.#PetrolDieselPriceHike pic.twitter.com/BXTAXvjkYC

Congress leader Digvijaya Singh led a similar cycle protest in Bhopal against fuel price hikes on Wednesday following which a first information report (FIR) was lodged against him and 150 party workers.

The oil companies started revising prices on7 June in line with costs after an 82-day break from rate revision amidst the coronavirus pandemic. For the first time in Delhi, diesel prices are higher than petrol prices due to varied value-added tax (VAT) in states.