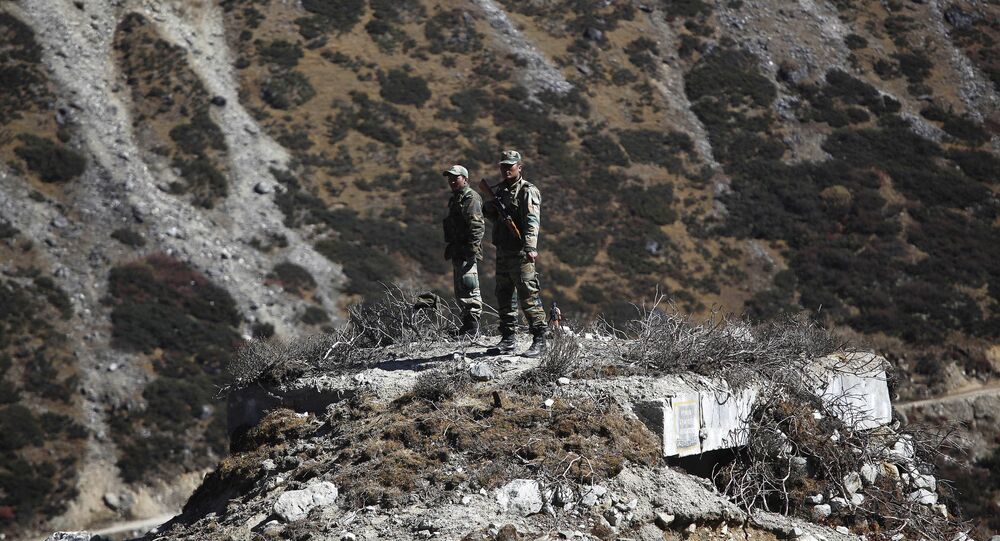 New Delhi (Sputnik): India's strategically-located northeastern state of Arunachal Pradesh is one of the territories where border tensions prevail between India and China. It is where China entered Indian territory during the 1962 war.

In a move stoking controversy amid already simmering Indo-China border tensions, Chief of India's Arunachal Pradesh Pema Khandu interacted with soldiers at the Bumla post, which is located along the India-China border, having, however, referred to is as the "Indo-Tibet" boundary instead.

Hailing the valour of the Indian Army, the state chief said in a tweet, "Had an opportunity to interact with the brave jawans (soldiers) today at Bumla post on Indo-Tibet border. Their josh (spirit) is at highest level. We are in safe hands when it comes to our borders ..!!"

The valour of Indian Army is what we counted ever since our Indepence. Had an opportunity to interact with the brave jawans today at Bumla post on Indo-Tibet border.
Their josh is at highest level. We are in safe hands when it comes to our borders ..!! pic.twitter.com/kwg5Uyx3MB

​The statement has fueled controversy because Khandu's reference to the boundary as "India-Tibet" border comes as a stark departure from India's traditional reference to it as the India-China border. Despite Tibetan claims of territorial sovereignty, China has always claimed the Tibetan plateau as an integral part of its territory.

The two countries engaged in war of words in February of this year when China objected to Indian Home Minister Amit Shah’s visit to the region.

The Indian Foreign Ministry said that India’s “clear and consistent” position on Arunachal Pradesh is that the state is an “integral and inalienable part” of the country.

The response came after Chinese Foreign Ministry spokesperson Geng Shuang said: “The Chinese government has never recognised the so-called Arunachal Pradesh and is firmly opposed to the Indian politician’s visit to the southern part of China’s Tibet region as it violated China’s territorial sovereignty, undermined stability of the border area, sabotaged political mutual trust, and violated a relevant bilateral agreement”.

Nevertheless, the Indian armed forces have continued with border infrastructure projects in the state, developing air landing strips, road networks, and proposed railway tracks over the past few years.

Meanwhile, in a fresh development on the Indo-China border conflict, Chinese Ministry of National Defense Spokesperson Wu Qian said on Wednesday that the entire Galwan Valley is part of China and responsibility for the China-India border conflicts lies entirely with the Indian side.

Direct border clashes took place between Indian and Chinese troops on 15 June in the disputed territory of Galwan Valley in the Ladakh region. With a continuous build-up along the loosely demarcated Line of Actual Control between the two nations, both sides are engaged in a high-profile dialogue to resolve the tensions. While India lost 20 soldiers to the clashes, China is yet to reveal the number of casualties on their side.

India, China Reach 'Mutual Consensus' to Disengage From All Friction Points in Ladakh