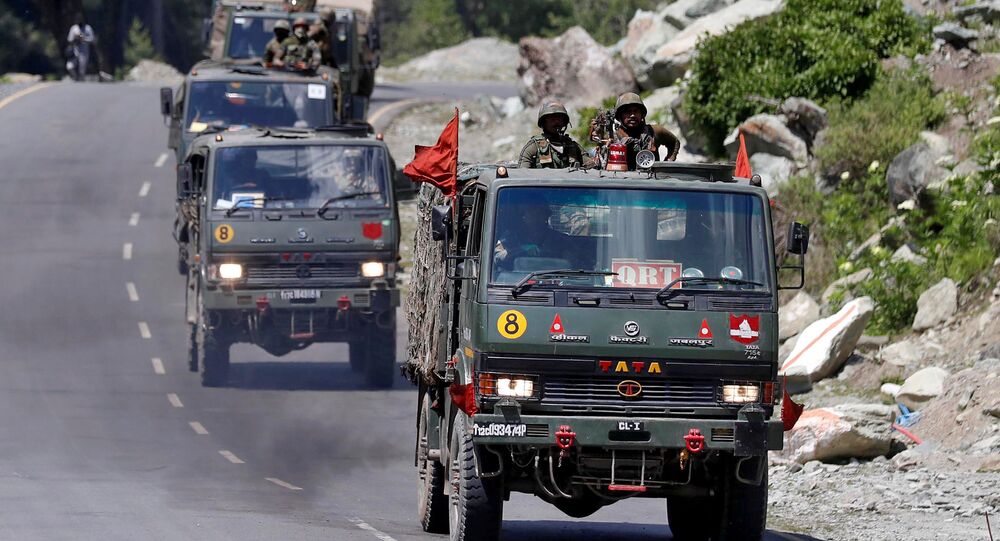 New Delhi (Sputnik): India and China have been engaged in an unprecedented border face-off at the Line of Control in the Ladakh region over the last two months. Despite around a dozen high-level talks, the agreed upon disengagement is yet to take place at Pangong Tso and the Galwan Valley.

Despite a "mutual consensus" to de-escalate tensions on the Indo-China border, satellite images purportedly show the Chinese People’s Liberation Army allegedly continuing a military build-up in the Ladakh region, along with India increasing motor boat patrolling in Pangong Tso.

Satellite images from 22 June also show possible defensive positions being set up by China, which include small walls and trenches.

​The build-up comes as the Indian Army claimed that the two countries agreed to disengage on the eastern Ladakh border on Tuesday during corps commander level talks. While both sides agreed to maintain dialogue and promote peace and tranquility in the area, a timeline for the disengagement process wasn't finalised, the Indian Army said.

“The relevant measures are being coordinated and arranged by the border troops of the two countries on the ground. I have no further information to release", Zhao Lijian, Chinese Foreign Ministry spokesperson replied when asked about the claim made by the Indian Army about disengagement in the disputed areas.

A day after meeting soldiers, Indian Army chief MM Naravane is scheduled to visit forward areas in Ladakh on Wednesday.

India and China have been engaged in a border standoff since the last week of April, but the tensions escalated into a direct face-off in the Galwan Valley on 15 June after both sides accused each other of violating the Line of Actual Control. In the violent clashes in three different places of the Galwan Valley, 20 Indian soldiers were killed.

The Indian Army claimed casualties on the Chinese side as well, but the Chinese Foreign Ministry on Tuesday slammed media reports saying that at least 40 Chinese soldiers were killed as “fake news".

A meeting of the Working Mechanism for Consultation & Coordination (WMCC) on India-China Border Affairs, led by diplomats from the foreign ministries from both the countries, is also scheduled for Wednesday.