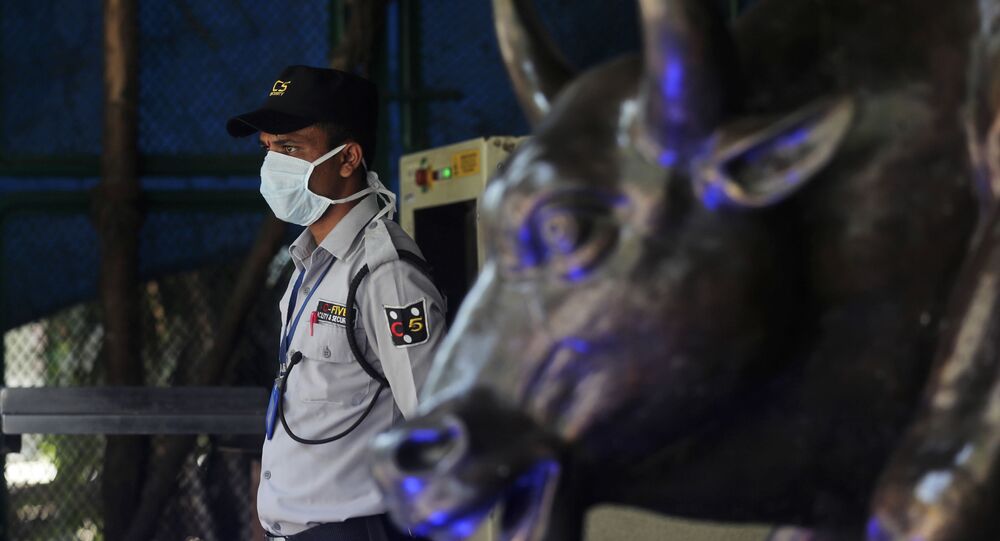 New Delhi (Sputnik): Global agencies like the World Bank have projected a negative growth rate for India in 2020-21. Despite macroeconomic fundamentals being hit by the pandemic, the Indian equity markets are skyrocketing. Bombay Stock Exchange’s Sensex has gained 10,000 points from March lows caused by the pandemic.

Indian equity markets have seen a sharp rebound from their March lows, caused due to uncertainties over the Covid-19 pandemic and lockdown fears. Indian equities are buoyant despite projections of a deep recession at least till this December.

Prime Minister Narendra Modi declared a national lockdown on 24 March to break the chain of contagion. The lockdown continued till 8 June, after which the government started to ease restrictions as part of the first phase of unlocking.

Full relaxation has not yet been restored, with educational institutions, cineplexes, and international air travel still restricted. Given the impact of the long-spanning lockdown, almost every global and domestic agency has projected "degrowth" (a concept suggesting shrinking economies can have benefits) in the current financial year (April 2020 - March 2021).

© AFP 2021 / MONEY SHARMA
COVID-19: Recession in India is Given, Question is How Deep the Crisis is, Analysts Say

If one juxtaposes the macroeconomic projections with the way Indian equity markets have behaved, a contrary trend is visible.

Indian equities tanked back in March, badgered both by Covid-19 and the lockdown. However, the major indices have recovered at least 40 percent from their March lows.

The Bombay Stock Exchange's (BSE) 30-share sensitive index, Sensex, which was up on Tuesday for the fourth consecutive day, has witnessed almost a 10,000 point recovery from March lows.

When the pandemic struck India, Sensex crashed from its peak of over 41,560 levels in February to 25, 981 levels on 23 March, two days before national lockdown commenced in India. The index is currently trading at 35,430, registering a 27 percent recovery from March lows.

Market experts see no sign of "reversal" in near future and believe that the pumping of money by foreign institutional investors and fundraising by India's Reliance Industries could be the key reasons for buoyancy in the markets.

However, they also caution that the rally, more than being based on domestic macroeconomic fundamentals, might primarily be the result of quantitative easing by the central banks to create liquidity in the market.

"The last few days have been a traders' delight, as the midcap and small-cap names (along with the banking and non-banking financial companies space) have provided good trading opportunities. As of now, there are no signs of reversal and hence, one should keep focusing on stock picking from a momentum perspective," says Ruchit Jain, Senior Analyst, Angel Broking, an Indian stock brokerage firm.

Kotak Institutional Equities, meanwhile, noted that there is actually no "money in the market" and it is the action of the various banking regulators across the globe that is pumping the liquidity in the market.

"This may seem like a strange statement when global market capitalisation is $81 trillion. Market participants have focused on quantitative easing by central banks as a key driver of stock markets recently. However, ‘new money’ did not ‘enter’ the secondary stock markets," said Sanjeev Prasad, Analyst, Kotak Institutional equities.

"The monetary actions of central banks (cut in repo rates, limited or unlimited purchases of all sorts of bonds) are simply their ways to tempt economic participants (corporates, households) to take more risks and thus, revive the economy," Prasad argued in a report authored jointly with two other Kotak analysts, Sunita Baldawa and Anindya Bhowmik.


To be sure, India's banking regulator the Reserve Bank of India has been pumping in liquidity in the financial markets ever since the pandemic began in the month of March. RBI cut the benchmark lending rate twice since the Covid-19 numbers started rising in March.

RBI, through tools like open market operations, targeted long term repo operations, and cuts in the cash reserve ratio, has infused upwards of $60 billion in the Indian financial system in the last three months.

The US Federal Reserve was the first to move aggressively in March and reduced its short term rates to 0.25 percent. It also announced the purchase of treasuries and mortgage-backed securities worth $700 billion and continues to do so, which has had an impact on US stock indices like the Dow Jones and Nasdaq. Market participants believe that the Federal Reserve's intervention, along with increased foreign capital inflows, has boosted sentiments in the Indian equity markets as well.

In the first week of June, foreign institutional investors pumped in $3 billion in the Indian equity markets, as per data from depositories. In just one week, India gained almost a third of the $8.36 billion foreign capital lost in the month of March and April this year, as global institutional investors liquidated their investments in India.

Yet another factor contributing to the market rally is the Mukesh Ambani factor, believe market participants.

Stock expert Vivek Mittal said, “The share price of Reliance Industries has almost doubled from the March lows when the stock markets crashed. Going by the RIL’s weightage in the Sensex, it is evidently clear that the index is getting a lot of support from Reliance Industries.”

With the aim of becoming a debt-free company by March next year, RIL went on a fundraising spree in the months of April and May. Companies like Facebook and private equity firm Silver Lake invested in the company’s Jio platforms. Collectively, Jio has raised over $15 billion in the last two months.