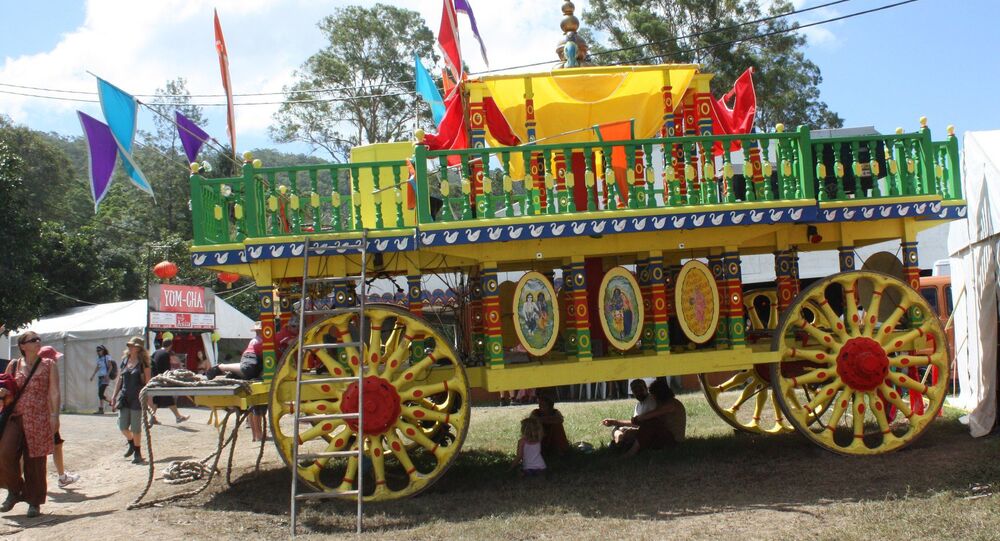 New Delhi (Sputnik): The ancient chariot festival that takes place in the Indian holy town Puri attracts millions of devotees from India and abroad every year. However, due to the pandemic, India's top court has only allowed the festival to take place with certain limitations this year.

After the Supreme Court of India overturned its own order cancelling the ancient Indian chariot festival - Jagannath Rath Yatra - the grand procession began in the coastal state of Odisha on Tuesday.

The court placed the holy city of Puri under curfew and has allowed only 500 people to participate in the festival, in contrast to the millions who take part every year. The priests who will participate were tested for COVID-19.

The tradition relates to carrying three Hindu deities in massive wooden chariots, each weighing 85 tonnes, to their aunt's place. The chariot is pulled by devotees.

In the video of the highly-spirited festival, the devotees can be seen carrying the deity of Jagannath (lord of the universe), Balabhadra (his brother) and Subhadra (his sister), to the chariot.

"Jay Jagannath"
Happy Rath Yatra to all💐💐🙏
Rathyatra is not only a big Hindu festival it's an emotion.Devotees are emotionally connected with Lord Jagannath.#RathYatra pic.twitter.com/5QI9SxE5Sf

​Netizens also shared the archived footage of the festival to convey the grandeur of the tradition. This old video shows millions participating, and singing and dancing during the festivals as decorated elephants walked beside the chariots.

2/2 This archive footage shows crowds of people in Puri, India celebrating Ratha-Yatra (aka Chariot Festival) in 1961, which commemorates Jagannath's annual visit to Gundicha Temple. (I have cleaned up the footage a little 🙏) #JagannathRathaYatra #PuriRathYatra pic.twitter.com/rB1AXDPeIy

​Indian Prime Minister Narendra Modi took to Twitter to wish everyone well on this auspicious occasion and expressed hope that this journey, filled with reverence and devotion, would bring happiness, prosperity, good luck and health to the lives of the countrymen. Other politicians also expressed their wishes to the people of the country.

I extend my warm greetings to all, on the auspicious occasion of Rath Yatra. May Maha Prabhu Jagannath bless everyone with good heath, joy and prosperity.