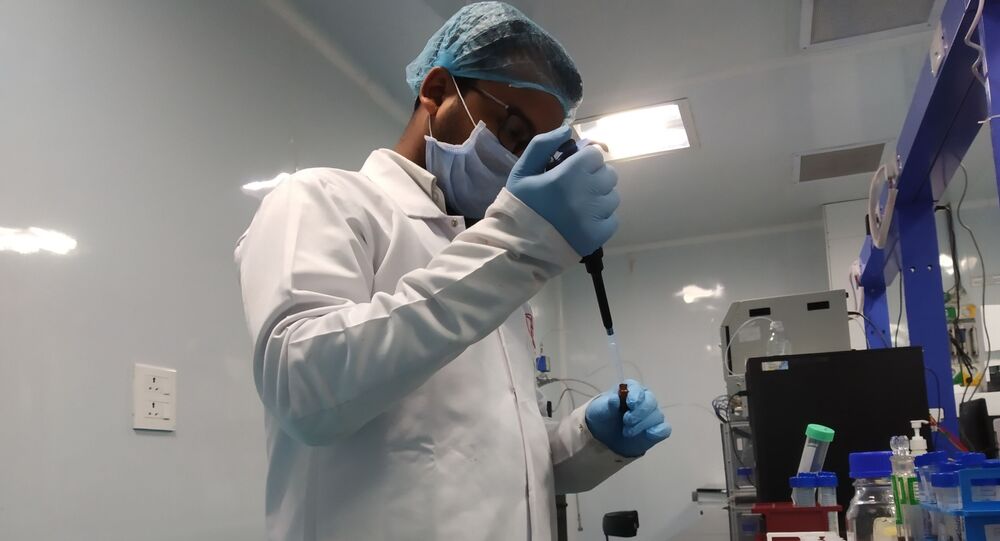 New Delhi (Sputnik), Rashpal Dasgotra: Based in the Indian state of Uttarakhand, Patanjali Ayurved is known for promoting the ancient Ayurvedic system of medicine in the country and in different parts of the world. The drug has been developed as the country with a population of 1.3 billion people is witnessing a spike in COVID-19 cases.

An Ayurveda-based Herbal pill, which is billed as being able to cure COVID-19 in five days to two weeks, is all set to be launched in the Indian market by the end of this month, Acharya Balkrishan, Managing Director of Patanjali Ayurveda Limited, said.

The drug has been developed at a time when the total number of COVID-19-positive patients has swelled to 425,282 in India. The country has witnessed 13,669 deaths so far, according to the Indian Ministry of Health and Family Welfare.

Speaking to Sputnik, Acharya Balkrishan revealed that this herbal medicine would have no side effects and can be used to treat COVID-19 patients. It has been prepared with some 17 herbs’ compounds prepared at the Patanjali Research Institute.

“We started working on the Corona pill in December. By April we completed a pre-clinical test, compound analysis, and simulation. We started recording results of the clinical study. In May, we began a clinical control test, I am happy that this pill gave the desired results in the first trial. This is not only a pill to boost immunity but to cure patients of COVID -19,” Balkrishan said.

He, however, emphasises that if Yoga exercises were  combined with the Coronil pill, it would yield magical results, as “yoga exercises not only protect our body from viral attack but also prepare our organs to protect against attacks from viruses like COVID-19”.

“To cure COVID -19, we need to focus on immunity. At the same time, we need to keep blood pressure under control, blood sugar levels within favourable limits, a stress-free mind and also keep the respiratory system undamaged, as it attacks our lungs. Coronil works on all five areas to cure patients,” said Ramdev.

According to Patanjali, its research team identified compounds which were effective in being used to defeat the virus - like Tulsi (basil), Geloi (Heart-leaved moonseed), and Ashwagandha (winter-cherry). After clinical control trials, these compounds were combined with 15 compounds (herbs) and were used to prepare a pill which is now being processed.

In 1995,  Acharya Balkrishan along with Yoga guru Baba Ramdev started research and production of Ayurveda medicines at Divya Pharmacy in Haridwar. Later, they started commercial production in 2006 and also established Patanjali university to conduct research on Yoga and Ayurveda.

Developed by Patanjali Ayurveda Limited, a medicine manufacturing organisation set up by popular Yoga Guru Baba Ramdev, the drug has been named “Coronil”. To be available by June-end, the medicine may cost up to $7-8 (INR 500 to 600 approx.) per patient.

In India, most of the patients, especially those who are home quarantined, are taking to Ayurved-based home remedies for building immunity or early recovery.

The development of the drug is of some significance as it comes from one of the biggest Ayurvedic medicine promotion firms: Patanjali.