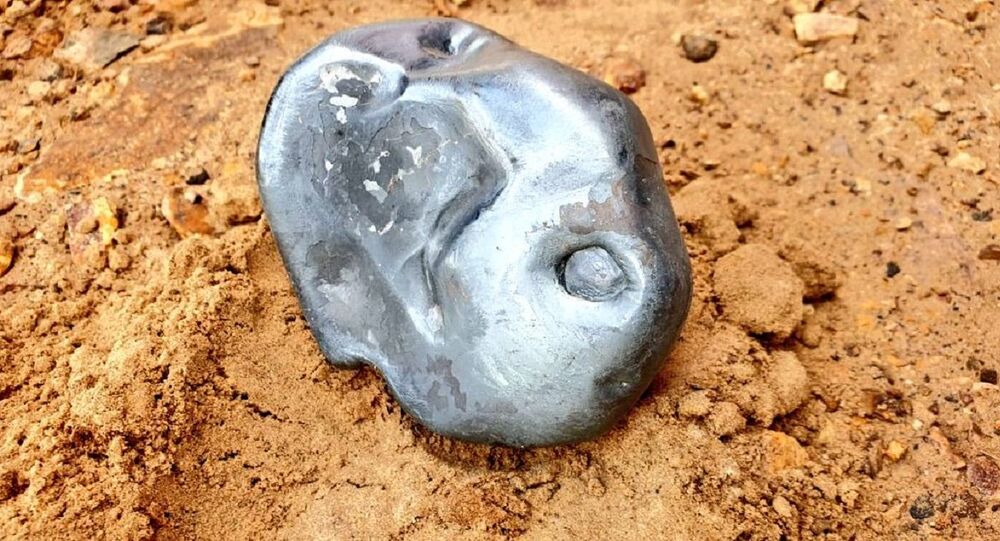 New Delhi (Sputnik): The celestial object has blown the mind of netizens as it appears to be very attractive and glittery. While some are calling it "fascinating" others have termed it an "alien mask" because of its shape.

A celestial object, which geologists have classified as a "very rare and valuable" metallic meteorite, has fallen from the sky in the Indian state of Rajasthan's Jalore district.

As per geologists it is a metallic meteorite - very rare and most valuable. @ParveenKaswan pic.twitter.com/6upY31jPLF

​The shiny and metallic object which weighs around 2.78 kilograms fell in the Sanchore area of the district at around 7:00 a.m. on Friday. Because of its weight, the object is believed to have sunk 4-5 feet into the ground. The object was retrieved by police and is set to be further examined by a team of scientists.

A picture of the meteorite was shared on Twitter and is generating an amusing response.

Did anyone find my mask? pic.twitter.com/kFaFID8Ne3

Looks like aliens too are wearing maks these days.
The one who's lost it will be fined ₹500. 😋

​Such events are not new to the northern Indian state of Rajasthan.

Recently, residents in the village of Alwar woke up to a loud thud in the wee hours, when a meteor-like structure crashed on the ground, emanating a bright light. The incident was captured on CCTV footage.

According to experts, tonnes of debris in space burn out before ever reaching Earth's atmosphere and an object falling on the surface is rare.