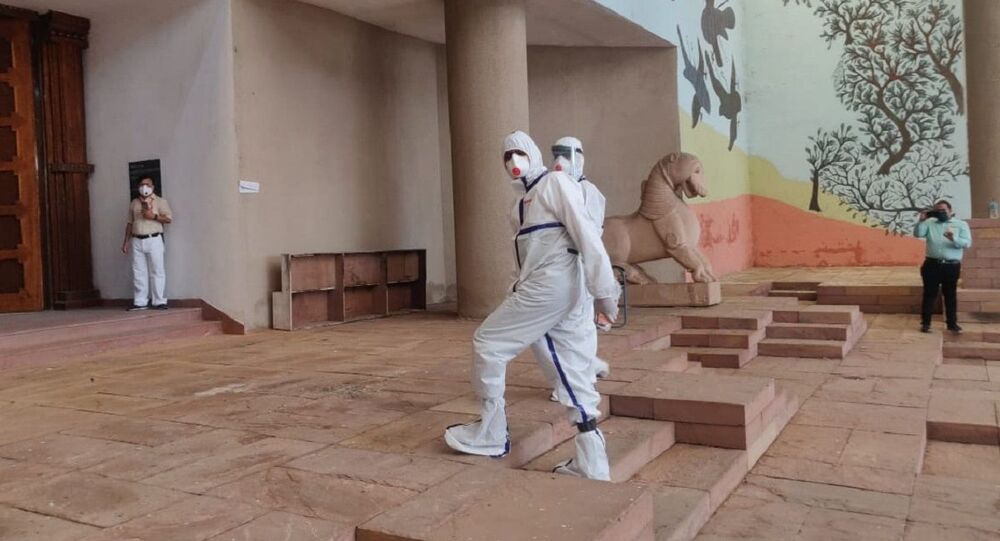 New Delhi (Sputnik): Eight states in India, such as Madhya Pradesh and Gujarat, are currently voting for 19 seats of the upper house of the Indian parliament, where each vote plays a crucial role in determining the strength of the party in the house.

While the voting process was underway on Friday for the upper house of the Indian parliament in the state of Madhya Pradesh, a Congress lawmaker who tested positive for the coronavirus a few days ago arrived at the state legislature wearing a personal protective equipment (PPE) kit to cast his vote.

Madhya Pradesh: A Congress MLA who had tested positive for #COVID19, arrives at the state legislative assembly in Bhopal to cast his vote. Voting is currently underway for three Rajya Sabha seats of the state. #RajyaSabhaElection pic.twitter.com/P8wltUu8fT

Being a member of the legislative assembly, he arrived in an ambulance and was the last one to cast his vote. Soon after he left, the entire voting areas and the main gate were sanitised to contain the spread of the virus.

Madhya Pradesh: State legislative assembly premises in Bhopal being sanitised after Congress MLA, who had tested positive for #COVID19 and had come here to cast his vote, left. Voting is currently underway for three Rajya Sabha seats of the state. #RajyaSabhaElection pic.twitter.com/pQhI4GUk1v

​Although stringent policies stipulating isolation and home quarantine for COVID-19 patients and suspects are in place, the norm in this case seemed to have been set aside because every vote plays a critical role in maintaining the party's majority in the parliament's upper house - the Rajya Sabha.

Rajya Sabha members, who are not directly elected by the people but by their representatives (legislators), are an important part of the parliament and play crucial role during the passage of bills or raising issues of great significance. Major ministers holding crucial portfolios in the Narendra Modi government hail from the Rajya Sabha and not from the lower house (the Lok Sabha), where members are directly elected by the people.

Meanwhile, Bharatiya Janata Party-governed Madhya Pradesh has three vacant Rajya Sabha seats and both Congress and its rival BJP have fielded candidates for each of these.

Voting for the 19 upper house (Rajya Sabha) seats, spread across eight states - including big ones such as Madhya Pradesh, Gujarat, and Rajasthan, concluded on Friday.

The vote counting will start at 5:00 pm (IST). The elections were scheduled for 26 March, but were postponed to 19 June due to the COVID-19 pandemic.