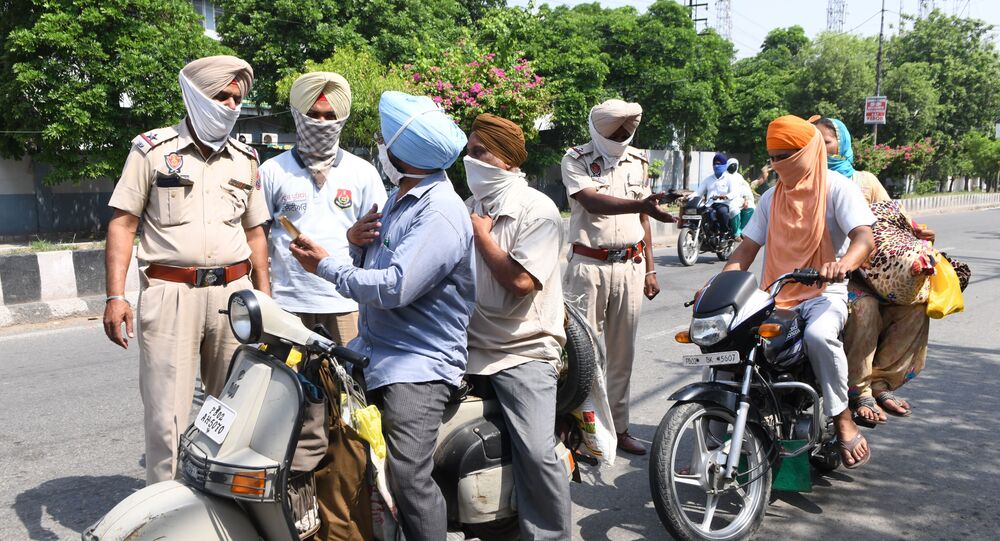 New Delhi (Sputnik): As per Delhi-based rights organisation RRAG, India has turned out to be the “riskiest place” for journalists around the globe during lockdown who faced physical assaults, arrests, summons and threats while covering the covering the events in front line with potential health risk.

As many as 55 journalists faced arrest, registered police complaints, court summons or show cause notices, physical assault, alleged destruction of property and threats for reportage on COVID-19 or exercising their freedom of opinion and expression before May during India's lockdown, Delhi-based Rights & Risks Analysis Group (RRAG) has stated in its report.

According to the Director of the RRAG, the Government of India, from the outset of the pandemic, has sought to suppress press freedom under the pretext of deliberate or inaccurate reporting on COVID-19.

“Even though on 31 March this year, the Supreme Court refused to interfere with the free discussion about the pandemic, the repression of the journalists who acted as messengers by risking their lives to convey the news of various mismanagement, deficiencies, corruption, hunger of the migrant workers and impoverished citizens, lack of adequate personal protection equipment for doctors at hospitals etc. began in earnest.” RRAG Director Suhas Chakma said.

He further alleged India has become the riskiest place for journalists in the world.

“It did not take a long time for the state and political activists" to launch allegations against the journalists, who were acting in the interests of "national integrity, sovereignty and the security of India,” Chakma added.

As per the RRAG report, the highest number of attacks on the media persons was reported in Uttar Pradesh (11), followed by Jammu & Kashmir (6), Himachal Pradesh (5), 4 each in Tamil Nadu, West Bengal, Odisha, Maharashtra, as well as 2 each in Punjab, Delhi, Madhya Pradesh and Kerala and 1 in Andaman & Nicobar Islands, Arunachal Pradesh, Assam, Bihar, Chhattisgarh, Gujarat, Karnataka, Nagaland and Telangana.

The journalists had highlighted the starvation faced by the migrant workers, and the failure of the administration to supply rations to migrants, the "gathering of the migrant workers, irregularities in the running of relief camps for migrants, mismanagement and negligence at quarantine centres, or simply reporting about a minister following the suggestions of astrologers or using certain terms against the ruling party or criticising state chiefs,” the report mentioned.

“10 journalists were arrested and four others were saved from being arrested by the Supreme Court for performing their duties during the period, for allegedly spreading rumours about COVID-19, exposing alleged corruption, allegedly violating lockdown rules even though the press is an essential service exempted under the lockdown, exposing shortage of food and personal protective equipment, tweets questioning why families were placed under home quarantine for merely speaking over the phone with COVID-19 patients, conducting sting operation to expose bribes etc.,” the reports read.

It further says that summons or showcause notices were issued to seven journalists for publishing report showing members of the Musahar community (a lower caste) eating grass to survive, alleged factual inaccuracies, alleged damage to the image of the administration or simply publishing an official letter which stated that the PPEs (Personal Protective Equipment) are not of the required quality.

“At least nine journalists were subjected to beating, including two in police custody. While one journalist was held hostage by Sarpanch of the Village (the village head) in Odisha, the house of another journalist was allegedly demolished because of his report on the ruling party lawmaker in Telangana state. A female journalist in Arunachal Pradesh was threatened for publishing a story 'Wildlife hunting on spike' during the lockdown,” it says.

“The Press Council of India (PCI) made four interventions in four cases during the period i.e. police complaints against Republic TV, editors of Media Break Newspaper, online threat to the editor of Arunachal Times and the threat of criminal prosecution and questioning of a special correspondent of the Indian Express by the Delhi Police. However, these interventions of the PCI are highly inadequate and media remains at serious risks in India,” Chakma said.