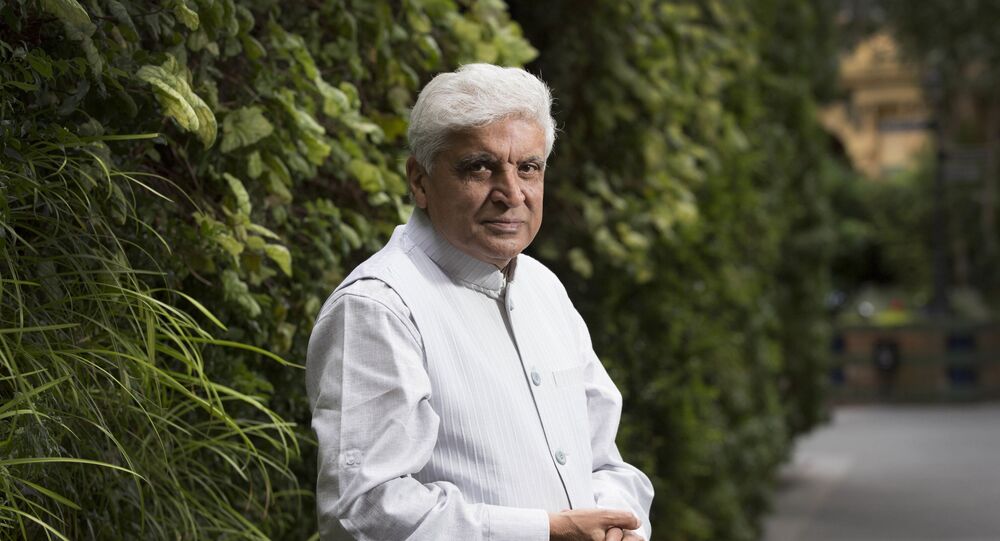 New Delhi (Sputnik): Over the last few months, the heartbeat of India – Bollywood – has been gutted with the pain of losing iconic veteran artists, including Irrfan Khan, Rishi Kapoor, and Wajid Khan, to various diseases as well as the coronavirus. Amid the gloom, virtuoso music composer and poet Javed Akhtar has brought some good news and cheer.

At 75 years, Javed Akhtar has become the first Indian ever to bag the Richard Dawkins Award for his critical thinking and progressive humanist morals, some of which have landed Akhtar in hot water on social media.

Richard Dawkins is a 79-year-old English evolutionary biologist and author who in 2013 was named as the world’s top thinker by the London-based Prospect Magazine. The Richard Dawkins Award is known for recognising the values of secularism and rationalism and has been presented since 2003.

Speaking to Indian media, Akhtar revealed that the US-based Centre for Inquiry (CFI) – a non-profit organisation that “strives to foster a society free of the dogmatic influence of religion and pseudoscience” and houses The Richard Dawkins Foundation – had informed him about the news via email.

The news sprung netizens, including Bollywood celebrities like Dia Mirza and Anil Kapoor, among others, into joy, and who then took to Twitter to congratulate the veteran lyricist. His wife, famous yesteryear actress Shabana Azmi, and his actor-director-singer son, Farhan Akhtar, also congratulated Javed Sahab – as he is fondly referred to in India – on social media.

Congratulations pa.. for being the first Indian to receive the Richard Dawkins Award for critical thinking and advancing humanist values. You absolutely and unequivocally deserve it. So so proud. ❤️❤️

Congratulations @Javedakhtarjadu on becoming the first Indian to receive the Richard Dawkins Award, an honor for distinguished individuals from the world of science, scholarship, education or entertainment. We are proud of his achievement & proud to be under his wing at IPRS. pic.twitter.com/0PhUVFojHr

Javed Akhtar Saab has won the the prestigious Richard Dawkins Award 2020 for critical thinking, holding religious dogma upto scrutiny, advancing human progress and humanist values. He is the only Indian to have won this award! @Javedakhtarjadu Congratulations! You make us proud.

Knowing that Richard Dawkins has been your hero since you read 'The Selfish Gene', the prestigious Richard Dawkins Award must be extra special for you @Javedakhtarjadu Saab! It's a truly incredible honour! Congratulations! pic.twitter.com/J5EXqP2I8g

Congrats @Javedakhtarjadu Sahab for being the first Indian to achieve Richard Dawkins Award for secular and scientific thinking and leading the humanitarian values.
You are a gem for us♥️#RichardDawkinsAward2020 #JavedAkhtar #Alig pic.twitter.com/2W6Dhj2DzP

​Known for his strongly opinionated words, Akhtar has been netted in troll-trouble with his tweets on sensitive subjects. This year, his views on India’s amended citizenship law (CAA) (related to non-Muslim illegal immigrants and not existing Indian citizens), which was deemed by some as discriminatory against the Muslim community, cast him in a negative light.

While the nation is struggling with Corona n the other problems caused by it like the exodus of the migrants , unemployment n hunger .Our home ministry is busy arresting those who had protested against CAA almost on daily basis .their priorities are different from rest of India