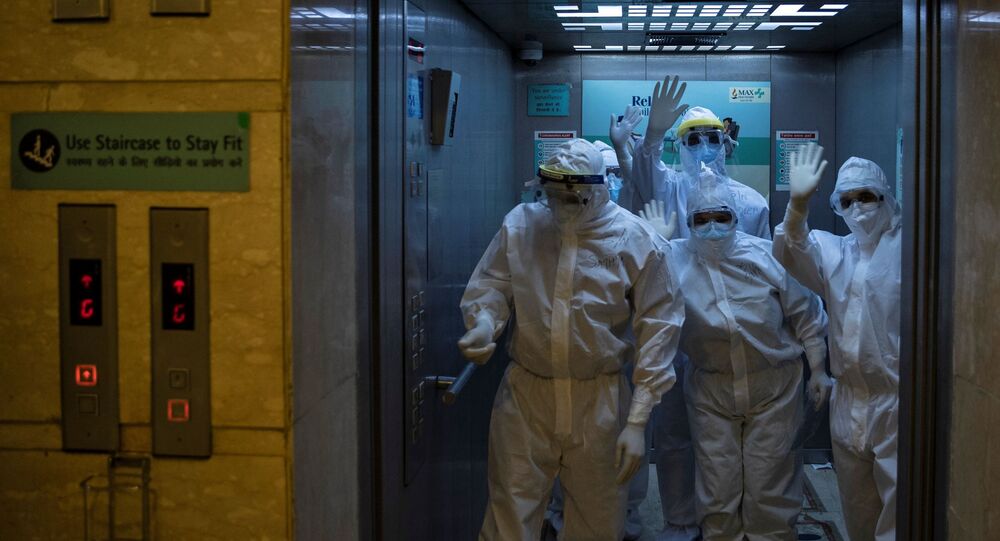 New Delhi (Sputnik): COVID-19 cases in India are breaking records every day, as the total number in the country has crossed the 255,000 mark. As hospitals are flooded with patients, experts have suggested that many Indian states may soon face a shortage of medics.

Gathering for a sit-in protest over the last eight days, the Nurses' Union of AIIMS, the country's top medical institute, has threatened to launch an agitation en masse if their demand to curb the work hours in Personal Protective Equipment is not met by India's Health Ministry.

The nurses have been demanding that their working hours in Personal Protective Equipment (PPE) be limited from six to four hours in COVID-19 areas.

AIIMS Nurses' Union leader Harish Kajla told Sputnik that the union is discussing the matter with hospital authorities. "If our demands are not met, we are planning to launch a full-blown protest with 5,000 nurses", Kajla said.

The union has written to the country’s Health Minister Harsh Vardhan and AIIMS Director Randeep Guleria to ease their work burden.

Stating that health workers often faint and feel light-headed and dizzy due to wearing PPE for long hours, the nurses launched a sit-in protest at the Jawaharlal Nehru auditorium of AIIMS last week.

Thanks #TNAI for taking a serious note on issues being faced by AIIMS NURSES. TNAI has written a letter to the Director of AIIMS to resolve nurse's issues immediately.@drharshvardhan @aiims_newdelhi @DrHVoffice pic.twitter.com/O6PNcxSDYh

​Similarly, the Nurses' Union at the Indian government-run RML Hospital in Delhi, too, held a protest outside the medical superintendent’s office, demanding that a separate counter and queue be set up at the hospital for the staff to get tested for COVID-19. The medical superintendent has assured the protesting staff that a separate counter for the hospital staff will soon be set up.

India is staring at a startling shortage of medics at a time when the country has 124,981 active cases with an average of 8,000 new cases daily. The death toll in the country is also rising and now stands at 7,200. India on Monday registered a record growth in cases at 9,983 in the last 24 hours.

The burden is falling on medics working under immense stress as patients continue to flood hospitals. There were 1,201,354 Medical Council of India-registered doctors in the country as of 30 September 2019. However, an increasing number of doctors are catching the virus.

States are also reaching the threshold of their doctor-patient ratio, with India's worst-hit Maharashtra asking Kerala to send doctors and nurses for COVID-19 treatment. The state has 43,601 active cases with a maximum number of deaths at 3,060.