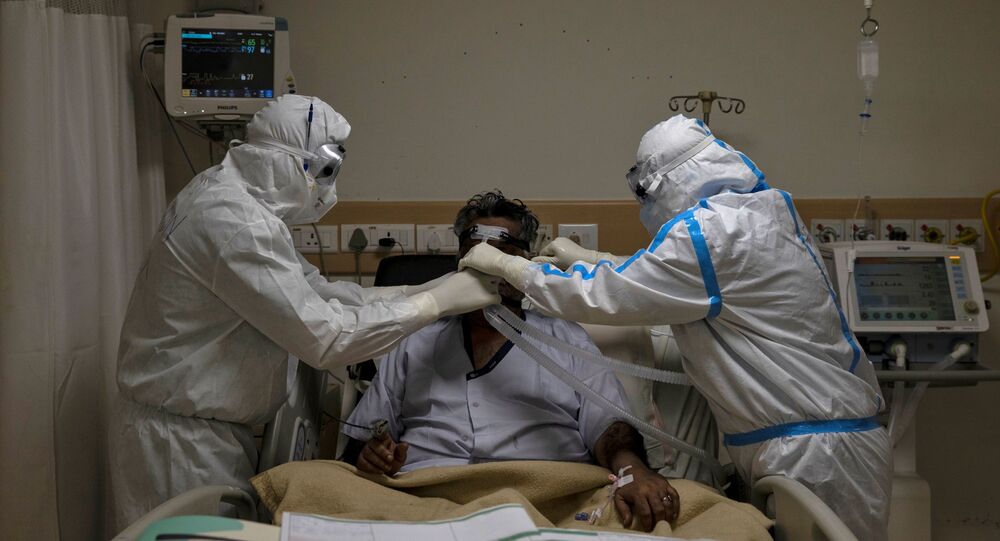 New Delhi (Sputnik): Delhi is the second worst-hit state in the country after Maharashtra with daily four-digit rises in the number of COVID cases and an increasing number of deaths. The state has therefore decided to reserve its hospitals for local residents.

The Delhi police have detained Bharatiya Janata Party (BJP) leaders, including the newly-appointed state leader Adesh Kumar Gupta, for protesting against Delhi Chief Arvind Kejriwal's decision to reserve state government-owned and private hospitals in Delhi for the people of the state.

"Delhi BJP chief Adesh Gupta, along with 14 others have been detained for organising protests in violation of the lockdown norms," a police official told media. Despite the phased lifting of the lockdown, protests are not allowed in the country.

Delhi: Adesh Kumar Gupta Delhi BJP Chief and other party leaders detained by police, as they were holding a protest against Delhi Govt over its decision that hospitals in the national capital will be available for the people of Delhi only. pic.twitter.com/DQ404PQRP9

​Adesh and other BJP workers demonstrated at Raj Ghat - a memorial dedicated to Indian independence leader Mahatma Gandhi - to protest against the move, and the politicians were seen holding placards and chanting slogans.

The detained party leaders were then taken to Delhi's Rajendra Nagar police station in a bus.

On June 1, the BJP's former state unit chief Manoj Tiwari protested at Rajghat against the Kejriwal government and his handling of the pandemic. Tiwari and other activists were then taken into custody by Delhi Police.

Delhi chief Kejriwal announced on Sunday that Delhi hospitals will be available for the people of Delhi only, while federal Government hospitals will remain open for all, adding that private hospitals except those where special surgeries are performed, will also be reserved for Delhi residents.

Kejriwal also announced the reopening of religious places, Delhi borders, malls and restaurants in the state from 8 June.

The national capital is reeling under a rising number of active cases which reached 16,229 on Sunday. The number of deaths in the state is the third highest in the country at 761. Kejriwal, who is also the chief of Delhi's ruling Aam Aadmi Party, said that Delhi would need 15,000 beds by the end of June, in contrast to the 6,000 that are currently available for COVID patients.