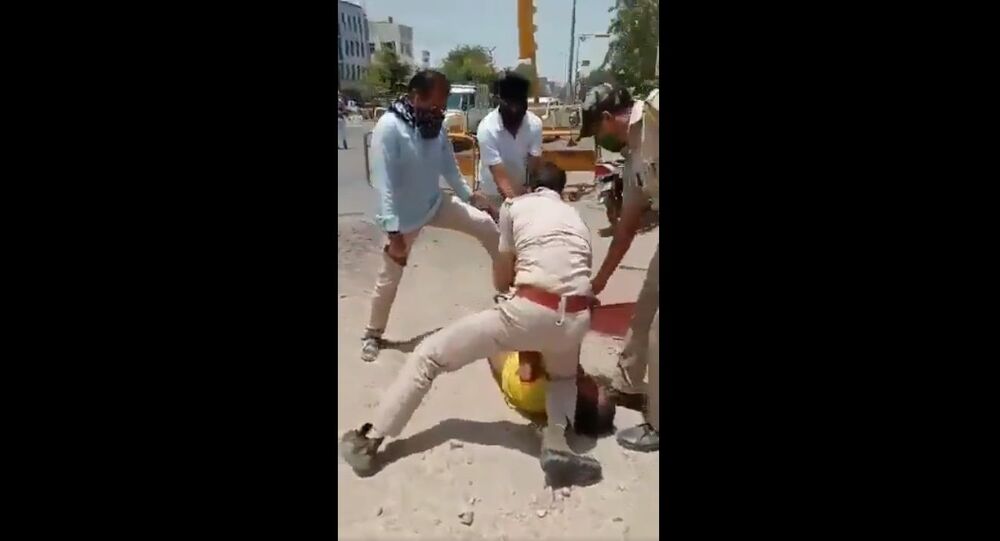 New Delhi (Sputnik): The recent killing of an African- American man. George Floyd, has sparked protests against racism and police brutality nationwide in the US, leading to riots and violence. Floyd was killed after a Minneapolis police officer kneeled on Floyd’s neck for allegedly buying cigarettes with counterfeit money.

In a grim reminder of George Floyd’s alleged murder, which has led to unprecedented protests in US, a video of an Indian cop pinning a man on the ground and kneeling on his neck has gone viral on social media.

In the video, one of the two cops present can be seen kneeling on the neck of the man and even thrashing him. The video also shows the man landing punches on the police officials and peeling off their masks.

Video on social media showing what could be called #Jodhpur's #GeorgeFloyd, showing cops throwing a person on the ground and pressing his neck. Cops in #Jodhpur reportedly acted after the person, said to be mentally challenged, turned violent after being confronted by the police. pic.twitter.com/lrPD6bV5bD

According to the police, the incident took place in Jodhpur, a city in the western state of Rajasthan on Thursday, when Mukesh Kumar Prajapat, who is reportedly mentally unstable, was caught roaming without a mask by two police constables.

The Government of India has made it mandatory to wear a mask for everyone stepping out of their houses.

“When the two personnel confronted him for not wearing a mask, Prajapat started hitting them. If police personnel are attacked while on duty, then it’s a shame for the society. The two constables ultimately subdued him. A case has been registered against him under relevant section of the Indian law and he was arrested,” a senior police officer from the Jodhpur police said.

The incident led Twitter users reminisce about the George Floyd incident, in which a Minneapolis police officer knelt on Floyd's neck in a similar fashion; the move eventually killed him.

Police constable kneeling on the neck of a man for not wearing a mask in Jodhpur.

Indian Police could not bear Minneapolis Cops hogging all the lime light pic.twitter.com/ykeX5GhiD7

#GeorgeFloyd moment for Congress In Jodhpur,Rajasthan police place their knee on the neck of a man pic.twitter.com/orFAquVkwF

Impact of media, one police official pins down a black in the USA and sits on his neck, another follows the lead and sits down on the neck of another in India!!