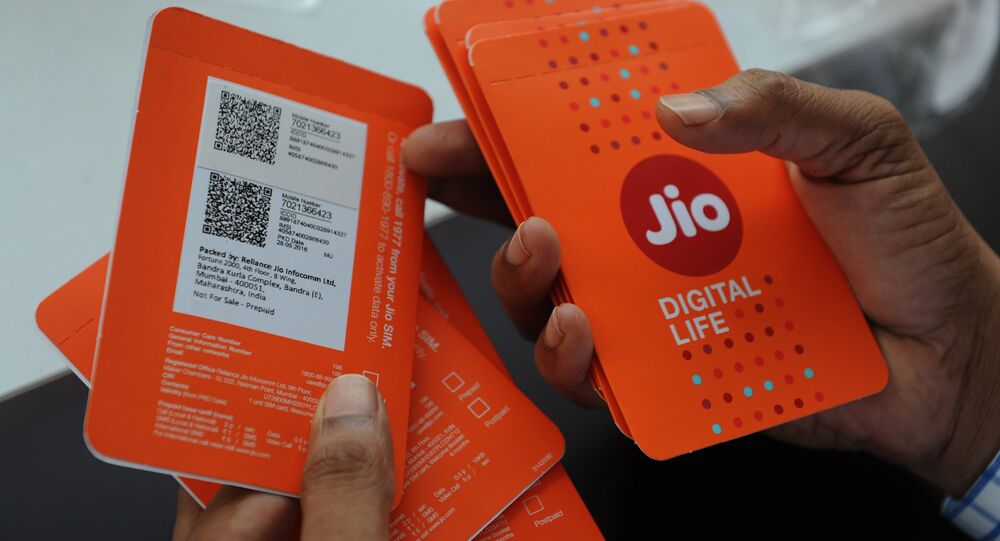 New Delhi (Sputnik): Top Indian business conglomerate Reliance Industries Ltd has been on a fund raising binge, even amid the COVID-19 pandemic. So far, in the last two months, Reliance Jio – the group’s telecom arm – has managed to raise $11.68 billion, getting almost half the amount from Facebook.

On Friday, the Indian equity markets yet again woke up to the news of fresh fund raising by India’s Reliance Industries- the conglomerate company lead by the country's wealthiest man, Mukesh Ambani. As per the deal, Abu Dhabi-based sovereign investor Mubadala will invest $1.2 billion in the company's telecom arm, Reliance Jio platforms, in exchange for a 1.85 percent stake in the firm.

This development, the sixth of its kind in the past two months, sent the Reliance Industries’ shares to dizzying heights as they jumped 2.38 percent on the Bombay Stock Exchange, hitting their 52-week high in early trading.

The investment spree in Reliance’s Jio began with a big–ticket investment by Facebook in April of this year. Facebook picked up 9.9 percent of Reliance Jio for an investment of $5.7 billion. Within one and a half months of the Facebook deal, global investors like Vista Equity Partners, General Atlantic, KKR, Silver Lake and Mubadala had made investments in the company.

Experts believe that the multiple factors helping Reliance Industries raise investments globally, include its dominant position in the oil sector, which is its core business, diversification into profitable sectors and the company’s plan to deleverage its balance sheet completely in less than a year’s time.

India’s leading energy expert Narendra Taneja told Sputnik, “Reliance Industries is major player in the oil and refinery sector. 70 percent of its revenues come from the oil and gas sector and the company is fundamentally very strong. Secondly, it has diversified into two lucrative areas: data (telecom) and retail. Thirdly, the company is trying to become debt free, which is a very important factor. With no debt to service, the investors stand to benefit as the profitability of the company increases.”

“India’s journey to a $5 trillion economy will be led by sectors like banking and finance, education, pharma, oil and gas, retail and data, which includes telecom. Reliance is present in three of the sectors,” Taneja added.

Reliance Industries has already announced that it plans to become a zero debt company by March 2021. Pointing to how raising fresh investments via stake sales will help the company mitigate its debt, Moody Investment Service, in a report dated 22 May said, “In total, RIL has so far announced the divestment of a 18.01% stake in Jio Platforms for INR 785.6 billion ($10.5 billion). Proceeds from these divestments alone will help the company pare around 49% of its net outstanding debt as of 31 March 2020.” Today’s deal with Mubadala has not been factored into this report.

“These divestments are credit positive because proceeds from sales of the stakes will be used for debt reduction and bring the company closer to its target of reducing its net debt to zero by March 2021,” Moody’s added in the report.

As on March 31, Reliance Industries’ outstanding debt was $44.8 billion and the company had cash in hand totalling $23.3 billion, bringing the net debt to about $21.4 billion. The company also raised 7.08 billion from rights issue of its shares, which closed on 3 June. The issue was oversubscribed by 1.59 times.