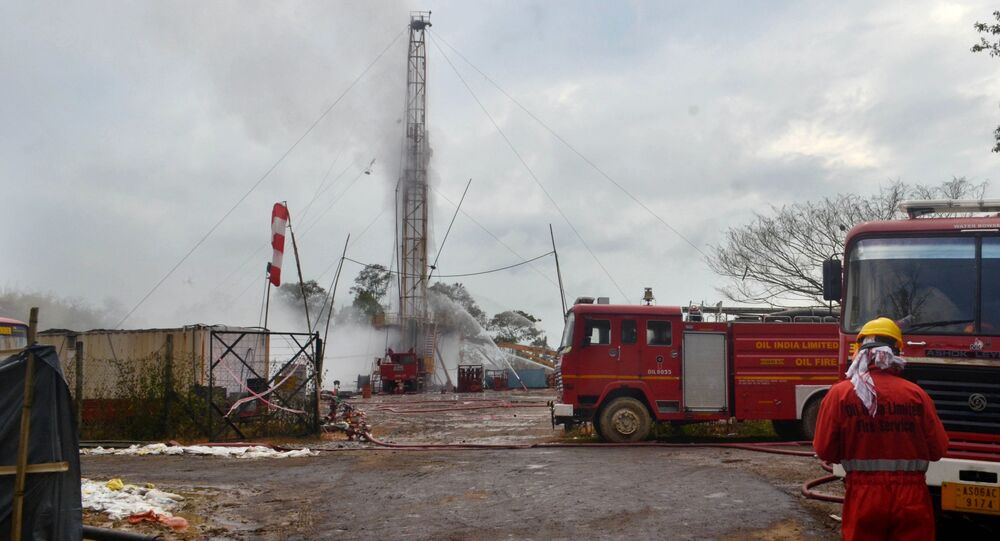 New Delhi (Sputnik): A natural gas leak at India’s second largest state-run hydrocarbon exploration and production unit has been continuing since 27 May. The blow out – an uncontrolled release of natural gas - was reported when the well became “active” during operations.

India’s second largest state-owned hydrocarbon exploration and production unit, Oil India Limited (OIL) said on Thursday that the gas blow out at its well in the Tinsukia district of north-eastern Assam is continuing “uncontrollably” with a team from the federal disaster response agency on standby at the site in case of emergency.

The leak started after the well exploded into a fountain of crude oil after the pressure control system failed. The continuous release of gas threatens sensitive wetlands, a national park and endangered species in the area.

“Oil fire service and with mutual aid are stationed at the site since 27-05-2020 for continuously water jacketing the well to avert any eventuality. Presence of gas and air & quality is being monitored at constant interval at strategic points. Layers of condensate (the residue from gas condensing after coming in contact with water) deposited near the site are being picked up,” said Oil India Limited in a statement.

​After OIL failed to cap the leakage, it sought the assistance of a Singapore-based team to plug it.

OIL has since moved thousands of inhabitants from the vicinity of the plant to relief camps with the help of the state government.

The last such well blowout happened in Assam in 2005 and the well was capped after 45 days of operations by experts from the United States.

Assam is already in the grip of massive floods and a spike in case of COVID-19. Nine people were killed and about 200,000 people were impacted by the floods.

The state has also recorded 1,255 active cases of COVID-19, with four deaths from the viral infection, according to data released by the federal Health Ministry on Thursday.