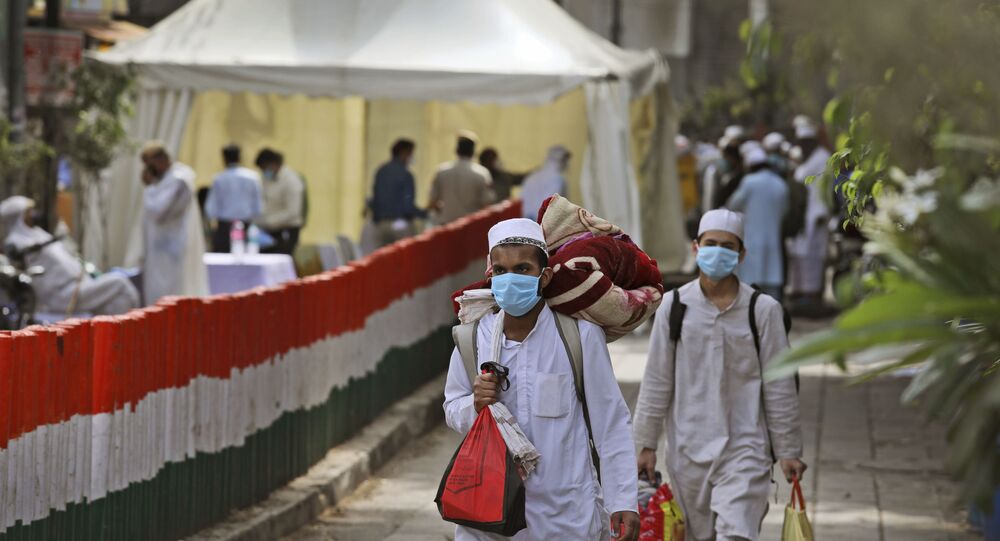 New Delhi (Sputnik): On 16 March, Tablighi Jamaat organized a three-day religious gathering at an Islamic shrine in the highly populated Nizamuddin area of Delhi. According to police, the event was attended by several hundred people from India and abroad.

India has made it clear that 2,550 foreign Tablighi Jamaat(Islamic Preachers) activists, who took part in the Nizamuddin congregation in March this year, will not be able to receive any kind of visa for the next 10 years, ensuring a complete ban to their travel to the country.

The decision comes as around 50-60% of the COVID-19 cases in most Indian states are claimed to have consisted of either Islamic activists or their contacts.

Earlier in April, the Ministry of Home Affairs (MHA), blacklisted 960 foreigners for violating visa norms as they had entered the country on a tourist visa but participated in a religious congregation.

According to the government officials, around 820 foreigners and several hundred others who took part in the congregation dispersed to different part of the country while around 2,300 people stayed back including 250 foreign nationals in the Islamic shrine in the Nizamuddin area of New Delhi.

The deputy chief of Delhi's Manish Sisodia said that those people who stayed back were evacuated from the building where Islamic preachers had tested positive for COVID-19. 617 of the 2,300 were admitted to hospitals and the rest were quarantined.

The Indian home ministry also advised states to track the movement of those Islamic workers in their areas as a large number of these workers were carriers of COVID-19.

​Tablighi Jamaat is an Islamic missionary movement that focuses on urging Muslims to return to their religion. All year round, Muslims from across the country and abroad visit the Markaz for religious purposes and move out in groups to different parts of India for religious activities.

'It's OK to Give Sample for COVID-19 During Fasting', India's Islamic University Appeals With Fatwa