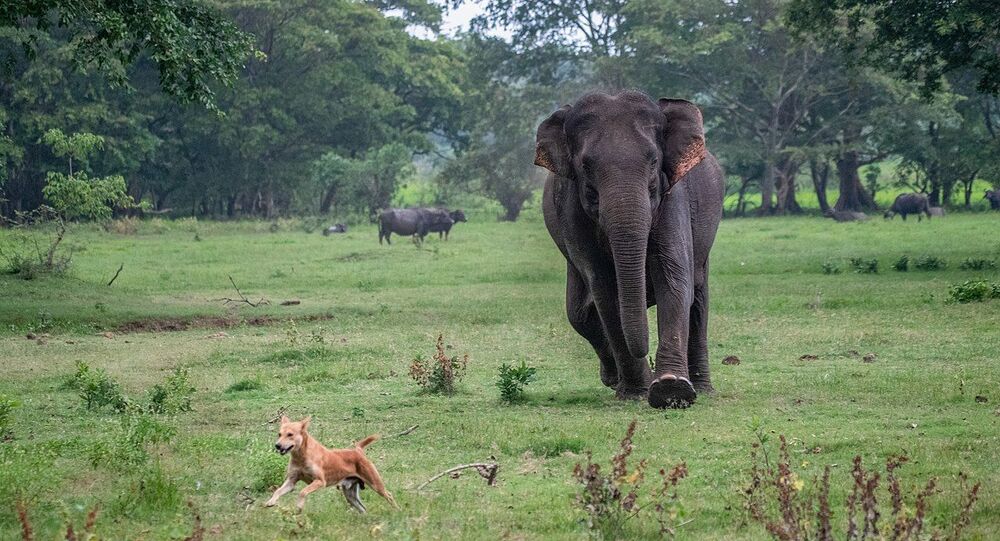 New Delhi (Sputnik): In India, elephants are revered as cultural icon and comprise 50-60 percent of Asia's wild elephant population. On Wednesday, the brutal murder of a pregnant pachyderm in India's Kerala united people to demand a probe into the incident and action against the culprits.

Indian Minister for the Environment Prakash Javadekar paid heed to his nation's outrage over the death of an pregnant elephant who was fed a pineapple filled with firecrackers, as he launched a probe into the incident on Thursday.

Central Government has taken a very serious note of the killing of an elephant in Mallapuram, #Kerala. We will not leave any stone unturned to investigate properly and nab the culprit(s). This is not an Indian culture to feed fire crackers and kill.@moefcc @PIB_India @PIBHindi

​The incident took place in the southern Indian state of Kerala's Palakkad district and was brought to light by forest officer Mohan Krishnan on Facebook. He explained how explosives burst in the mouth of the elephant and caused grievous injuries to her lower jaw leaving her in agonising pain. The injured elephant then ventured into a river, immersed her trunk in water seeking relief from the pain, and silently breathed her last.

Soon after the incident came to light, netizens took to social media to vent their anger. They demanded that Kerala Chief Minister Pinarayi Vijayan take note of the brutality and launch an urgent probe into the issue. Kerala Forest Minister K. Raju has also assured that the culprits will be prosecuted to the fullest extent of the law.

A pregnant elephant in India, Kerala was fed a pineapple stuffed with fire crackers. She tried to save her baby by drinking the river water but failed to, and ended up dying pic.twitter.com/5c2sSAHAnp

Barbaric, disgusting! Just read about the pregnant #elephant in Kerala.

She didn't harm any human being. She was hungry. Her only mistake was that she trusted humans.

Images of her standing lifeless in water made me cry. Humans are the most cruel animals. #RIPHumanity#RIP 🐘 pic.twitter.com/IxHnOOzQxQ

An animal rights organisation has told Sputnik that villagers and farmers often use such grim tactics to keep wild animals away.

Meanwhile, a report of a similar incident, where a female elephant was found dead with a fractured jaw in the forests of the Kollam district of Kerala, has surfaced after this incident. Forensics experts have yet to determine the cause the injury, which could also have been caused while consuming something.

Birth of Baby Jumbo: Trumpets and Clapping by Foot from Herd Welcomes the New Member – Video