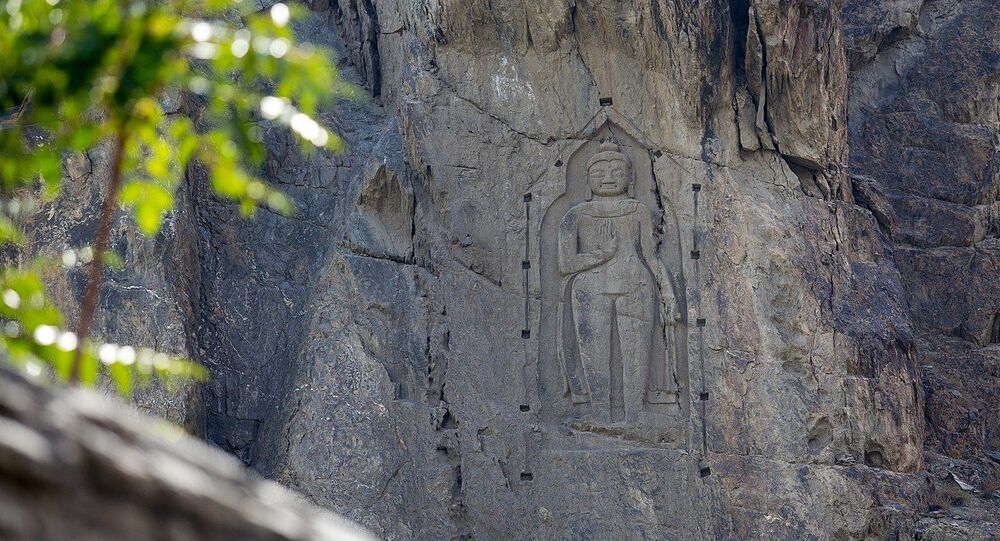 New Delhi (Sputnik): Buddhist rock carvings in Gilgit-Baltistan in Pakistan-administered Kashmir were vandalised earlier this week, allegedly in retaliation for protests over a dam project in the region. Buddhists have assumed that the dam, which is being constructed with China's, help will destroy the 800 AD archaeological site.

India on Wednesday condemned the defacement of a Buddhist heritage site in the Gilgit-Baltistan area of Pakistan-administered Kashmir.

“It is a matter of grave concern that Buddhist symbols are being destroyed and the religious and cultural rights and freedoms are being trampled with impunity in the Indian territories under illegal occupation of Pakistan”, said Anurag Srivastava, spokesperson for India’s External Affairs Ministry.

Srivastava said that egregious activities of such a nature, which display contempt for ancient civilizational and cultural heritage, are highly condemnable.

“We have once again called upon Pakistan to immediately vacate all illegally occupied territories and end the gross violation of political, economic and cultural rights of people living there”, said Srivastava.

Jammu and Kashmir has been a bone of contention between the two nuclear-armed South Asian neighbours since they gained freedom from British colonial rule in 1947. Both claim the territory in full, but administer it only in parts.