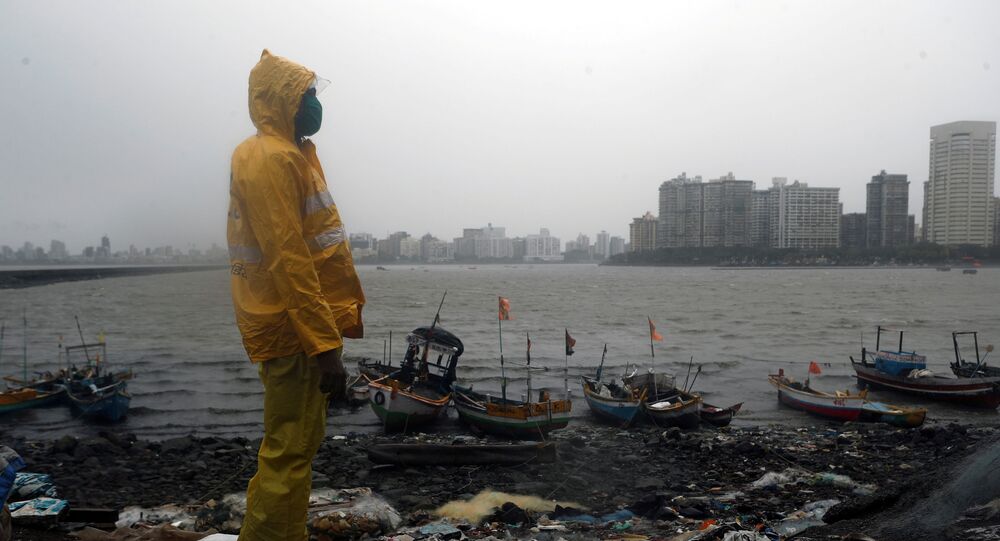 New Delhi (Sputnik): The Indian government has deployed thousands of disaster response forces in Maharashtra, Gujarat, including Mumbai – the financial capital of the country. Cyclone Nisarga is one of the strongest in more than a decade and may aggravate the health crisis in the state, which is already badly hit due to COVID-19.

The landfall process of Cyclone Nisarga, which has intensified into a severe cyclone, began on Wednesday afternoon near Alibag, 60 miles away from Mumbai in Maharashtra. While announcing the landfall, the Indian Met Department said that the process is expected to be completed in the next three hours.

The country's Met Department said that the severe cyclonic storm dropped heavy rains and brought winds gusting up to 120km per hour on Wednesday afternoon, making it the biggest storm in more than a decade. Maharashtra's government has asked the 16 million people of Mumbai – home to the Reserve Bank of India and the benchmark stock exchange – to remain indoors as the cyclone will bring heavy rains cause a flood-like situation.

As Predicted #CycloneNisarga has fully landed near Alibaug,Raigad District of Maharashtra

Nisarga is the second to hit the country after Cyclone Amphan that created havoc in the eastern part of the country in the last week of May, resulting in the deaths of nearly 100 people and losses of some $13 billion worth of public property.

The cyclone hit the city at a time when Mumbai accounts for more than a fifth of India’s around 5,900 deaths and about 207,000 infections.

Forward Cloud of Cyclone Nisarga has entered Raigad district about 30 minutes ago & proceeding as per prediction of IMD. Eye of the Cyclone likely to make landfall in 1 1/2 to 2 hrs followed by tail which will have high winds @NDRFHQ @ndmaindia @PIBHomeAffairs @ANI pic.twitter.com/NkikCiuyQX

The National Disaster Response Force has evacuated over 100,000 people, including some coronavirus patients, to safer locations. Jawaharlal Nehru Port Trust – country's largest port – will also remain closed for 24 hours, the port said in a statement.