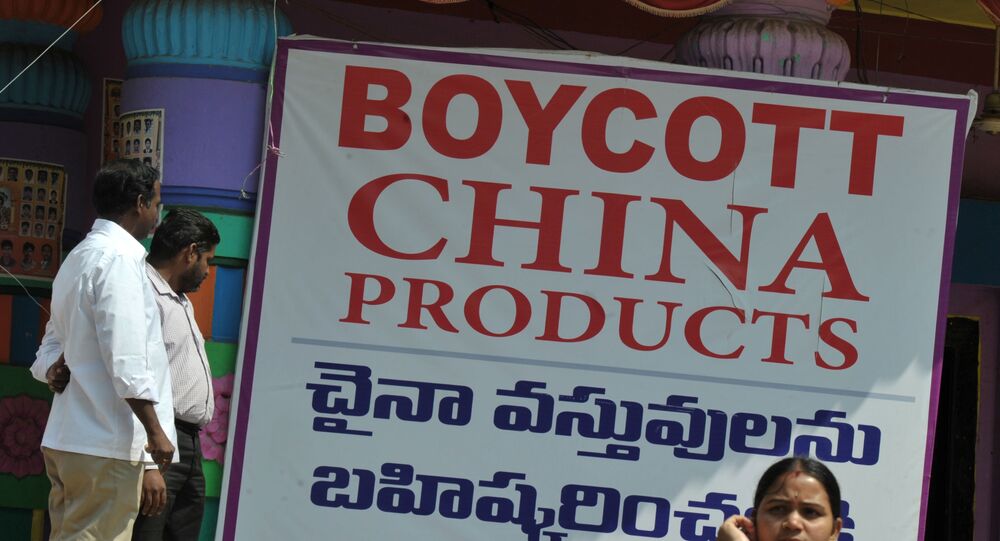 New Delhi (Sputnik): In India, the public sentiment towards China has taken on a negative hue of grey since the coronavirus pandemic, which is believed to have started in the country, broke out. Amid the existing stress, Indo-China tensions recently escalated along the border in the Galvan Valley sector of India’s Ladakh.

In what seems to be a testimony of shifting emotions towards China, a social media movement urging Indians to stop using and buying Chinese apps and products appears to have picked up a substantial pace in the country.

Over the weekend, several Indian public figures, including Sonam Wangchuk, a famed Ladakh-based educationalist, along with Bollywood celebs like Milind Soman and Arshad Warsi, joined the #BoycottMadeInChina – that includes an array of products ranging from smartphones to light bulbs.

“Anti-China sentiment is on all-time high. It has been going on for a long time but what we are seeing today is a monumental rise in negative sentiment. Today when the world is suffering from Corona, these noises have become louder and finally everyone realised the need to go in for an alternate”, industry and cybersecurity analyst Achen Jakher told Sputnik.

India is a huge market for China-made gadgets from companies like Oppo, Vivo, Xiaomi, and OnePlus, along with Chinese games and apps like PUBG and TikTok. In addition, India also imports mechanical, electrical, and chemical products, base metals, plastics, rubber, textiles, furniture, and toys from China.

Indians, however, are now adhering to Prime Minister Narendra Modi’s urge to “go vocal for local” and are deciding to boycott all China-imported products.

Stop using chinese apps right this is the order of common man of india. Follow if you are true indian.
1 week for chinese softwares and
1 year for chinese hardwares

​“People use social media platforms as a medium to vent out their anger and we have been seeing this more and more in the last few years. Companies from all around the world, including India, monitor and watch social media like a hawk. Now that they see so much resentment with the ‘Made in China’ tag they will come out with new alternatives, this is for sure”, Jhaker added.

Recently, the US Department of Commerce extended its ban on Chinese companies added to an Entity List last year to May 2021, citing national security concerns and allegations that Chinese technologies could be spying on and gathering public as well as classified information - something these companies and Beijing have consistently denied.

The Chinese short video-making app TikTok – which has its largest user base in India – was recently reported to have been slyly tracking location information of users via SIM cards – something which is not permitted in India.

A popular Indian tech reviewer, known as “Technical Guruji” on YouTube, suggested that the Chinese smartphone player Xiaomi was tracking the search data of users in incognito mode.

Amid the tensions, Beijing on 31 May warned India to stay “careful and rational” before getting roped in as a “US pawn in attacking China”.

“If in a new cold war, India leans towards the US or becomes a US pawn attacking China, the economic and trade ties between the two Asian neighbours will suffer a devastating blow. And it would be too much for the Indian economy to take such a hit at a current stage”, China has cautioned through its state-run media outlet The Global Times.

The warning comes at a time when heavy vehicles and clusters of armed troops from both India and China are staring at each other in Ladakh. For so long, China has invested in India's smaller neighbours like Pakistan, Sri Lanka, Myanmar, and Nepal – all of which, incidentally, surround India on different sides.

Indians view this as another attempt-in-the-making for China to push the borders with India.

“China will not sit quietly, they will battle this out by flexing their muscle which works best, money. That is one temptation we as a nation need to fight it out. It is asking a lot from people who are struggling to make their ends meet but at the same time want to keep themselves updated, but if governments can step in to share the burden of companies to hash out a model which makes it affordable for the common man, it can be a winnable situation,” Jhaker noted.

The pandemic – a vaccine for which is still being worked on – has affected over 190 countries worldwide, killing more than 374,359, as noted by real time statistics platform Worldometer.com. In India, the pandemic has infected a total of 190,535 people and killed 5,394 patients, according to the Ministry of Health and Family Welfare. However, a total of 91,819 people in India have been cured or discharged as well.

The pandemic has shaken global economies as governments around the globe have declared movement restrictions on people and imposed lockdowns to prevent the further spread of COVID-19 – something that has tremendously affected trade and businesses.

The International Monetary Fund (IMF) has also forecast that the recession following industries post-coronavirus will be worse than the Great Depression – which so far has been regarded as the worst economic downturn in the history of the industrialised world, lasting from 1929 to 1939.