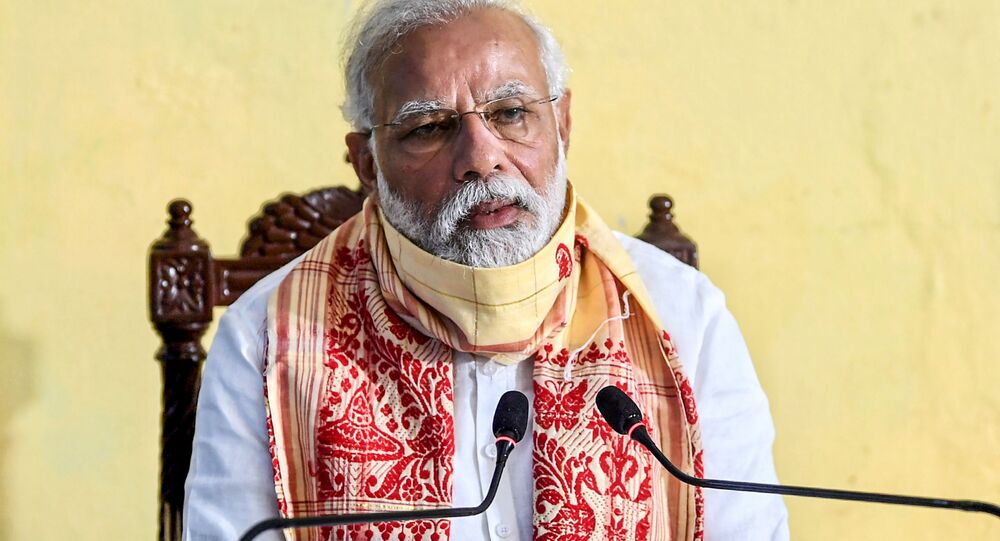 Where Are the Good Days? #StepDownModi Trends as India Faces Crisis on Border and Within the Country

New Delhi (Sputnik): As a two-month lockdown comes to an end and authorities head towards relaxations, India is witnessing its record spike in COVID-19 cases. It has surrassed France to become the seventh worst-affected country in the world. Aside from the pandemic, India is also facing a border dispute with China’s People’s Liberation Army.

Indian Prime Minister Narendra Modi has garnered widespread appreciation for introducing a national lockdown much earlier than some other major countries to control the spread of COVID-19. While the lockdown hasn't stopped the spike in cases, it has also pushed the country’s economy to the edge.

Amid the pandemic, the country is also witnessing its worst internal migrant crisis and a border stand-off with China, which has evoked sharp criticism of the government both online and offline. Outraged netizens have made the hashtag #StepDownModi trend, and are demanding the end of Modi's tenure as a Prime Minister amid rising frustration at the grass-roots level.

Ever since he came to power the minorities have been at the receiving end. The economy is in a shambles. Mob lynching and rape is the order of the day. Kashmir, because of his coercive measures has further alienated. Simply put Modi government has ruined India. #StepDownModi

NitiAyog' Fantasy:
India🇮🇳 will have Zero Covid cases on 16th May2020

Chaiwala failed in every field ..

​The deteriorated relations with friendly neighbouring Nepal has also added to the woes. Nepal has accused India of encroaching into their territory following the inauguration of the strategic road leading to Chinese border along the Lipulekh Pass. The move has led to Nepal's government introducing an amendment in its Parliament for a new political map.

Under the strong leadership of Modi who had 56 inches chest, even Nepal started to show Laal Aankh to India.#StepDownModi pic.twitter.com/l8ylUZWMg3

​From 1 June, India has relaxed its lockdown across the country in spite of rising COVID-19 cases, which stand at 190,535, including 93,322 active cases. Furthermore, throughout the lockdown, India witnessed a crisis as millions of internal migrants, in state of panic and fear and by whatever means they could find, journeyed homeward on foot from urban areas.

In the border region, since the last week of April, Indian and Chinese troops have been in a stand-off in the eastern Ladakh region, where the armies of both countries have moved their heavy arms and vehicles. The troops of the two countries were even involved in a physical altercation in Sikkim region, where 11 personnel were left injured.