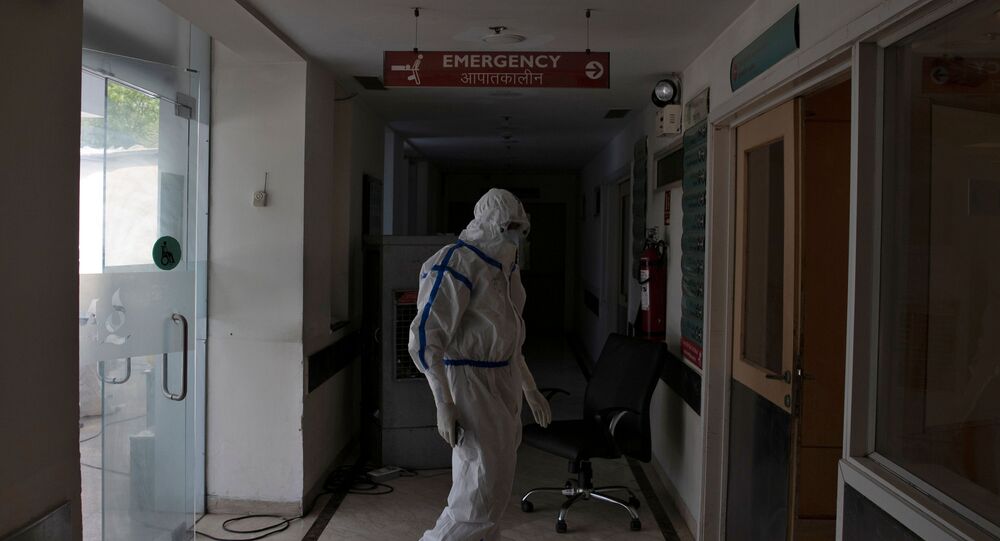 New Delhi (Sputnik): On Monday, India saw a record spike of 8,392 fresh cases in the last 24 hours, with a total of 190,535 positive cases. Among the worst-hit states in the country are Maharashtra, Delhi, and Gujarat. With three different parties ruling the three states, a political slugfest has begun amongst the leaders.

With the end of the strict two-month lockdown in India on Monday, the country witnessed a record spike of 8,392 fresh cases in 24 hours.

As the number of cases continues to rise, party leaders in the Indian states worst-affected by the virus have gotten into a Twitter barb over higher numbers of cases and deaths in each other's states.

General Secretary of the ruling Bharatiya Janata Party BL Santhosh launched a scathing attack on the Aam Aadmi Party leadership in Delhi for failing to control the spread of the virus in the national capital.

Delhi under @ArvindKejriwal gets into competition with Mumbai under @OfficeofUT . 1000+ cases for past few days , under reporting deaths & then blaming others , pushing migrant labourers to borders irresponsibly .

​India’s national capital Delhi has recorded the second highest number of positive COVID-19 cases at 19,844, of which 10,893 are active, 8,478 cured and 473 fatalities, as per data from the Ministry of Health and Family Welfare.

The Delhi High Court took note of the media reports and issued a notice to the government on 28 May, to which the government answered that the situation was a result of “unavoidable circumstances, because of a reduced capacity to cremate bodies, the refusal of crematorium workers to handle COVID-19 cases, a sudden spike in COVID-19 cases, and a refusal of relatives to come forward to claim the bodies”.

This is KEM hospital Mumbai ! pic.twitter.com/5KQQcCrYCH

​However, Santhosh further alleged that doctors in government hospitals have horrifying stories to tell as they are claiming double digit death figures in every hospital for the past 20 days.

​Gujarat has recorded the second-highest number of COVID-19 deaths at 1,038 after Maharashtra’s 2,286. Prime Minister Narendra Modi’s home state has recorded 16,779 positive cases, with 5,822 active, as per the Ministry of Health and Family Welfare.

Aam Aadmi Party’s Singh said in a tweet: “Brother Santhosh, there is one state in the country called Gujarat, whose health infrastructure has been described as a sinking Titanic. Gujarat has the highest death rate due to coronavirus and the country’s two prominent names of the ruling party are associated with it. Please take some courage to tell this also”.

Singh was referring to Prime Minister Narendra Modi and Home Affairs Minister Amit Shah. The Gujarat High Court had lashed out at the state government under the Bharatiya Janata Party for poor health infrastructure in the state.

“It is very distressing and painful to note that the condition prevailing, as on date, in the Civil Hospital, is pathetic", the court had said during a hearing of a public interest litigation on COVID-19.

“As we said earlier that the Civil Hospital is meant to treat patients. However, it appears that as to date, it is as good as a dungeon. Maybe even worse than a dungeon. Unfortunately, poor and helpless patients have no option", the court said.

Gujarat’s Ahmedabad is the worst-hit district and its civil hospital has recorded the most deaths, allegedly due to a lack of proper equipment such as ventilators.

Being run by a coalition government of Shiv Sena, the Nationalist Congress Party, and Congress, Maharashtra has recorded the highest number of COVID-19 cases at 67,655, with 36,040 still active.

The BJP, which failed to form a government in the state earlier this year during the assembly elections, is using the COVID-19 crisis to attack the ruling coalition.

Amidst online critcism of the government, BJP leaders have been visiting Raj Bhavan to speak to the governor, sparking rumours of toppling the government. BJP MP Narayan Rane said: “Maharashtra should be put under the president’s rule. The governor should step in".

While most countries across the world are seeing a dip in COVID-19 cases, Indian Health Ministry data has shown that the total number of coronavirus cases in the country have increased to 190,535.

The number of deaths from coronavirus reached 5,394 with 230 coronavirus-related fatalities in the last 24 hours. From Monday, restrictions around the country including inter-state movements have been lifted.

Cured May Not be Recovered: The Trick Behind India's High Recovery Rate