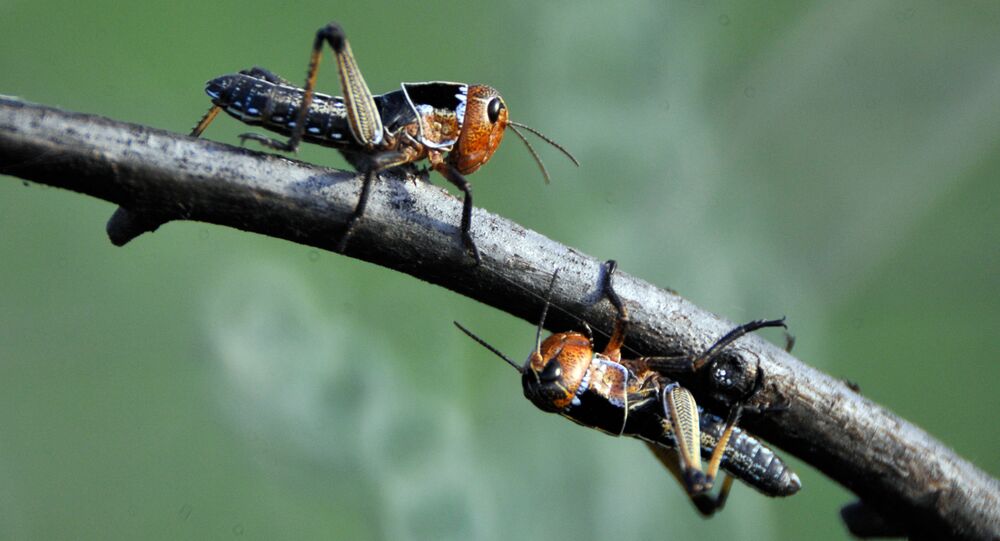 New Delhi (Sputnik): Indian farmers have faced immense losses over the last two months due to the ongoing coronavirus-induced lockdown and locust attacks.

While addressing the nation on Sunday, Indian Prime Minister Narendra Modi promised all possible support to those farmers affected by the worst invasion of migratory pests in three decades. The desert locust, a voracious grasshopper, travelled all the way from Iran to India via Pakistan and created havoc in states like Maharashtra, Uttar Pradesh, Punjab, Rajasthan, Gujarat, Madhya Pradesh, and Haryana - in the last two weeks.

"Whether it's the central government or states or agricultural department, the administration is using modern technology to fight these pests. We are taking note of innovative measures. I am confident that all of us together can brave this situation", Narendra Modi asserted during his monthly radio programme “Man ki Baat” on Sunday while adding that the attacks remind us of the damage that a small creature can do.

The worst ever attack of desert locusts has already destroyed over 600,000 hectares of crops in India over the past four weeks and as per UN Food & Agriculture Organisation (FAO) estimates, the locusts will keep swarming India in phases until July of this year.

© Photo : Kamal Parashar/twitter
Sounds of Tragedy: Indians Use Drum Beats, Sirens To Fight Second Plague of Crop- Munching Locusts
The government has been making some serious efforts to eliminate the locusts to protect the upcoming batch of crops. On Saturday, the state of Rajasthan successfully destroyed a huge number of locusts in Jaipur in midnight drone operations. The chemical sprayed by drones saved around 400 hectares of crops in the hilly areas of Jaipur.

Earlier this month, videos emerged on social media showing people using traditional means to keep the hoppers away from fields. A kid in India's Madhya Pradesh was seen flaunting his drumming skills in a field to scare away locusts.

In other parts of the country, police have been using sirens to scare off the short-horned insects which multiply quickly and are capable of feasting on crops. An average swarm of 40 million can consume food for around 35,000 people in one day.

Nothing a Lil Music Can't Fix? Farmers Use DJ Speakers to Scare off Locusts in India - Video