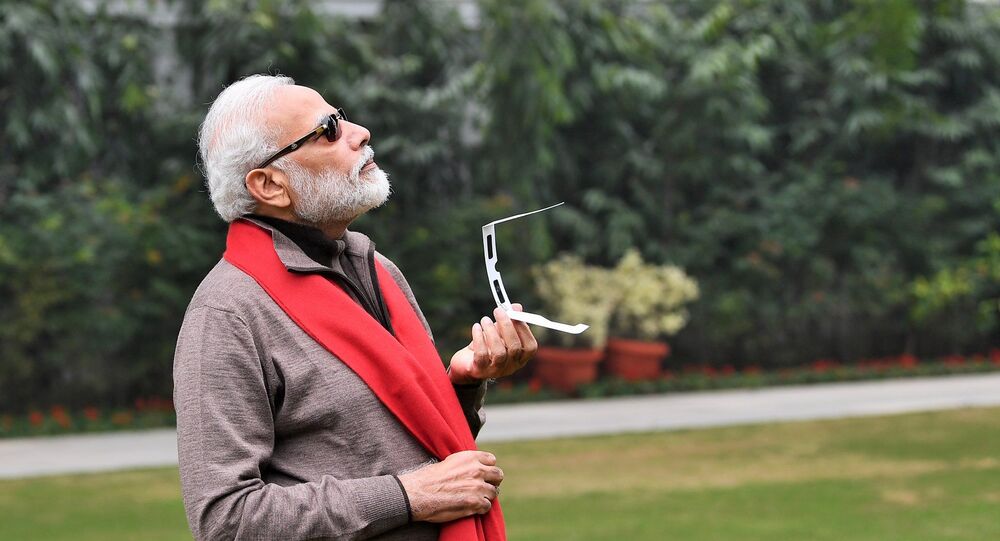 New Delhi (Sputnik): Prime Minister Narendra Modi, who is known for his oratory skills and speeches, spoke from his heart on Saturday. India's 69-year old leader has now entered his sixth year as head of the country.

Marking the completion of the first year of his second term, Indian Prime Minister Narendra Modi wrote a heartfelt letter, addressed to the citizens of the country.

“..Had the situation been normal, I would have been blessed to be in your midst. However, the circumstances brought about by the global Coronavirus pandemic have led me to write this letter and seek your blessings.”

Talking about historic decisions made under his leadership and India's rapid progress, Prime Minister Modi’s open letter mentioned that India’s stature has risen on the global scale over the last few years. The initiatives and schemes he announced for India's poor – including electrification, as well as providing internet access and gas connections in villages – have helped restore the dignity of poor people in the country.

Limiting the aforementioned developments to his first tenure, between 2014-2018 as India’s Prime Minister, Modi  went on to write about the historic decisions India witnessed during his BJP government’s second term in power.

“Whether it was the topic of Article 370 for national unity and integrity, or the happy outcome of the age-old conflict over the Ram temple's construction, or the factor disrupting the modern social system, the 'triple talaq', or the symbol of India's compassion, the citizenship law; all these achievements you remember,” the letter said.

In August 2019, India revoked Article 370 of its Constitution, that had granted the state of Jammu and Kashmir special status. As a step towards ending a long-lasting war between Indian and Pakistan over the land of Kashmir, Prime Minister Modi’s decision brought Kashmir closer under the umbrella of the rest of India. But the historic decision created ripples in politics at an international level.

After the revocation of Article 370, the BJP government in December 2019 passed the controversial Citizenship Amendment Act (CAA) – that entitles non-Muslim immigrants who entered India before 2015 from Pakistan, Afghanistan and Bangladesh – to apply for Indian citizenship. The CAA came hand in hand with another proposed law – the National Register of Citizens (NRC) – that required Indian citizens to prove their ethnicity with ancestral documents and paperwork.

The CAA and NRC decisions had sprung many in India into a mode of rebellion – people accused the Modi government of propagating communist and pro-Hindu sentiments, while being unfair to the minorities. Violence had gripped parts of Delhi and other cities in India in early 2020 – when US President Donald Trump flew to India on his first state visit – and held discussions on Indo-US relationships with Prime Minister Modi.

Before the CAA and NRC protests reached definitive result, the coronavirus pandemic began spreading from China to the rest of the world, reaching India somewhere in mid-February.

In light of the pandemic, Prime Minister Modi announced a nationwide lockdown on 25 March – which still remains in effect.

In his letter today, the Indian leader has predicted that India will bounce back in economic terms in the post-Coronavirus era and set an example for the rest of the world.

“Under the given circumstances, there have been discussions as to how the economy of India along with those of other nations will emerge out of the crisis. At the same time, there is this belief that the way India has surprised the world in facing coronavirus with its unity, the country can present the same example in the economic field -- 1.3 billion Indians can not only surprise the world but can also inspire it,” the letter highlighted.

The letter, however, did not forget to address the “tremendous suffering” and plight of India’s labourers, migrant workers, minor artisans, vendors and unskilled employees who faced the burnt of the pandemic.

Earlier this month, Prime Minister Modi announced a $266 billion economic stimulus package to help the COVID-19-struck economy, including setting up a $13 billion fund for agriculture infrastructure.

“In this period, our priority has been to empower the poor, farmers, women and the youth. Today over INR 72,000 crore ($9.5 billion approx.) have been deposited in the bank accounts of more than 95 million farmers. To make available piped drinking water for the country's over 150 million rural population, the 'Jal Jeevan Mission' has been initiated. To ensure better health care for our more than 500 million cattle, a massive campaign for livestock vaccination is under way,” the letter noted.

However, Prime Minister Modi did note that the setbacks in 2020 have been disheartening. The leader’s second term started in 2019 with the hopes and goals of transforming India into a 5G-enabled $5 trillion economy – but the coronavirus pandemic hit the world hard – and as of now, everything is pretty much postponed, cancelled or somewhere in between.

“Just when we were moving quickly towards realising our country's aspirations, the corona pandemic surrounded India too,” the letter said.

But, the Prime Minister did note that these inconveniences should not transform into a crisis of life.

“We have to move forward with the same patience and courage that we shown so far. The global pandemic has brought about a crisis situation, but at the same time, for us Indians, this is also the time for determination. We have to remember that no calamity, no crisis can determine the present or future of over 1.3 billion Indians,” the Prime Minister added.

Signed “Your Pradhan Sevak” which translates as Your Head Servant, the letter has been posted on Prime Minister Modi’s Twitter account in Hindi as well as in English.

Penned a letter to my fellow citizens.

It takes you through the year gone by and the way ahead. https://t.co/t1uHcAKkAH pic.twitter.com/Ci8TImK3CU

While some netizens appreciated the leader's efforts, others pointed out more things the leader must implement to help India progress even further.

PM letter to the nation, thanking the people for being together and helping India 🇮🇳 to reach higher. Also he brought to the people knowledge all the good sceems and decisions taken for the welfare of the country. #India #NarendraModi pic.twitter.com/jXPgRLuFNL

Modi,do something for free transportation, food,shelter for migrants instead of wasting time on writing letter detailing your so called achievements.#NarendraModi https://t.co/MtbZt9j3DD