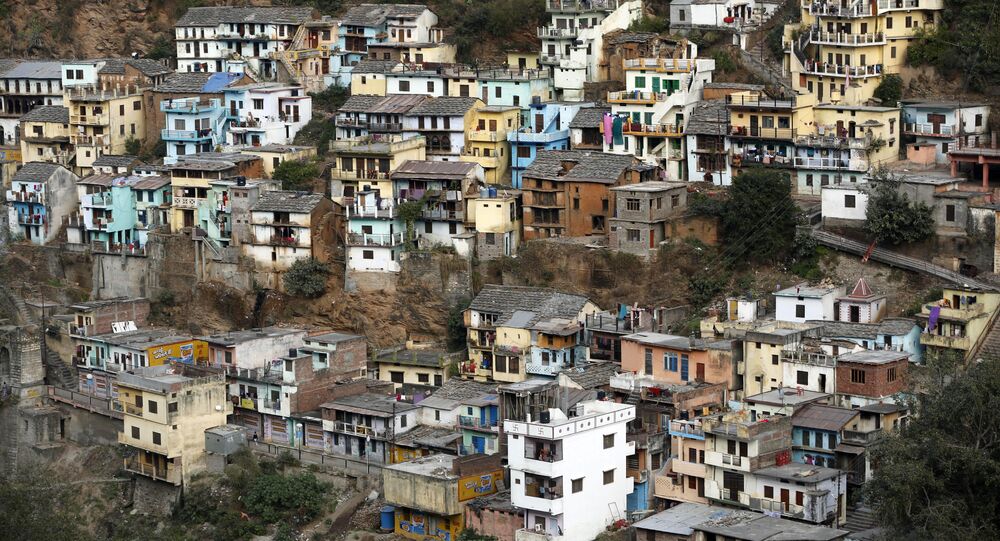 New Delhi (Sputnik): The “cursed” year 2020 is escalating to become only more catastrophic. The year will be remembered as the time nature unleashed its wrath worldwide, including in India, which was recently struck with a super-cyclone and a plague of locusts and now faces claims of wildfires.

For the past few days, forests in the foothills of the mighty snow-capped Himalayas have been threatened with fires. The region is home to the Indian state of Uttarakhand, where one can find several popular tourist destinations including Rishikesh, the Corbett Wildlife Sanctuary, Dehradun, Nainital, Haridwar and Mussoorie.

Indian netizens, who have remained stuck inside their homes due to the COVID-19 lockdown, which has lasted over two months so far, blew the news of a forest fire out of proportion when they began trending #SaveTheHimalayas on Twitter, while sharing scary pictures of the forest burning like a humongous bonfire.

BK Gangte, the Chief Conservator of Forest (CCF) from the Uttarakhand forest department on Wednesday told Sputnik that most of these pictures making the rounds on social media are from older incidences, and some were even from different parts of the world, simply picked up from the web and posted without verified details.

"Most of these images are fake. Yes, there is a forest fire in some densely planted areas here, but the situation is totally under control. Last year, nearly 1,600 hectares of land was engulfed by the wildfires, this year, it is only around 71 hectares. Please do not believe everything on Twitter,” Gangte said.

BK Gangte also shared evidences of how most pictures circulating on Twitter under the #SaveTheHimalayas hashtag are old images from other forest fires that happened in 2016-2017.

It rained in #Uttarakhand yesterday, he said addding "situation is under control."@SputnikInt pic.twitter.com/WhyXzRXIbM

Explaining the reason there have been fewer fires, Gangte said that because of the lockdown, the number of humans smoking, driving and lighting campsite fires in these forests is next to nil – which also reduces the risk of these fires getting out of hand.

Explaining how usual this is, Vandana Pandey, former wildlife officer with the Wildlife Trust of India told Sputnik, “…forest fires happen every year, usually triggered by people themselves for various reasons – to control the populations of invasive animal species, to collect non-timber forest products like fruits, Tendu leaves etc, and to cultivate the lands as rural dwellers believe firing up a land makes it more fertile with ashes of leaves and wood.”

Netizens have been crying out loud on Twitter, comparing the Uttarakhand forest fires with the destructive bush fires in Australia and the Amazon.

Australian wildfires, uttrakhand forest fires, cyclone Amphan, covid19 All these are the result of human selfish nature
They look like a natural disaster but are actually man-made.

Human civilization has become the most ever technologically advanced in history but sadly none have bothered to develop any mechanism to prevent, monitor & counter the #wildfires. If we don't act to save nature today, future generations won't praise us tomorrow.#SaveTheHimalayas pic.twitter.com/LCCFY28ePY

Australian wildfires, uttrakhand forest fires, cyclone Amphan, covid19 All these are the result of human selfish nature
They look like a natural disaster but are actually man-made.

​Forest officials  from the region, however, have urged people to verify information before sharing fake news on social media.

© AFP 2020 / STR
Forest Fire in Indian Hill State of Himachal Pradesh 'Completely' Extinguished
“As of now, I have not come to know about any serious fire near Corbett, even in the hilly fires. As compared to previous years, the forest fires this year are comparatively lighter.  Summer is here, temperatures are rising, I would suggest we wait for another 10 days or so to get a clear picture of the wildfire scenario, because the weather has been rainy here and as of now there is nothing to be worried about,” Dr. Harendra Singh Bargali, Deputy Director of the Corbett Foundation in Uttarakhand told Sputnik.

The Indian government has laid out plans to curb the forest fires every year but it remains ineffective so far, as India State of Forest Report revealed that over 30,000 incidents of forest fires had occurred in the country in 2019. The report says: "36 percent of Indian forest cover (657,000 sq. km) is prone to frequent forest fires and of this, 10 percent is highly prone".

The forest fires which caused extensive damage to the environment every year brought attention to the Indian lawmakers again this year after around 7 million hectares of forests in Australia and California were destroyed by fires.