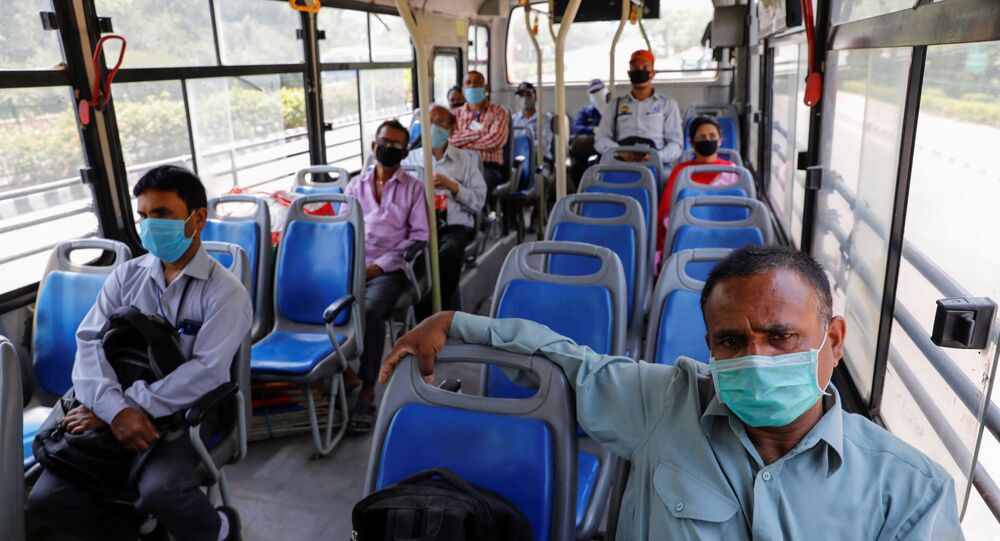 New Delhi (Sputnik): India is currently undergoing its 'fourth phase' of a nationwide lockdown imposed by Prime Minister Narendra Modi's government to slow the spread of the COVID-19 pandemic. Several states have offered multiple exemptions to citizens as a means of reviving the economy.

Days after Delhi's state chief announced several caveats while partially opening up the city of nearly 20 million amid the national lockdown, the implementation of the anti-Covid-19 measures appears to be going for a toss at the outset.

A lot of people, if not all, found at public places, appear clueless about proscribed precautionary measures. A reality check on the ground in the city throws light upon a probable scenario in the near future amid the pandemic.

The Delhi government has emphasised the revival of economic activities, issuing guidelines which state that markets can open but shops will open on an odd-even basis. Taxis and cabs will be allowed to function but only two passengers can travel during a ride, and drivers will be responsible for disinfecting the vehicle before every ride. Buses will be allowed to accept just 20 passengers only, among other guidelines.

Sputnik spoke to people from different walks of life to get to the heart of challenges and opportunities during the lockdown and its aftermath. People appear to require additional clarity and assistance in complying with rules and regulations, especially as the local trading community wants to understand how the odd-even reopening rule is to be followed.

According to Praveen Khandelwal, Secretary General of the Confederation of All India Traders (CAIT), representing the country’s business community, in the last 55 days of lockdown, shops have remained closed.

“Though the traders of Delhi have opened their shops under the odd-even system, the majority of them are not appreciating this system. It is posing several difficulties in compliance. Most of the whole markets are in crowded areas of the walled city and a majority of the buildings have many shops. There is huge confusion among traders about which building number is considered odd or even, or are the shops inside the building with private numbers to be considered,” Khandelwal said.

He added there are an estimated one million shops in the national capital alone, and declared that the odd-even rule poses difficulties for customers, as well.

Naveen Shukla, the president of the Market Association in Rohini, claimed that during the lockdown only shops with essential services were open, but asserted that now all shops have been allowed to function.

"All the section of the market have suffered a huge loss as per their business. The only problem we face now is that in a few days the markets will be filled again and there are chances of the infection to spread."

Volunteers or officials should be deployed so that social distancing is followed, or we will have to hire someone on our own to keep a watch on the behaviours, he added.

According to CAIT, since the lockdown was announced, the city's retail sector has suffered losses totaling some $6.6 billion.

Many stand-alone shop owners say they are doing everything on their own, in terms of safety measures, and there is no compliance oversight from authorities.

A grocery shop owner in the Rohini area stated that since the markets have reopened, COVID-19 cases have increased on a daily basis.

“The government claims that we have to live with the virus till the vaccine is generated. But what steps are you [the government] taking for public safety? As life is returning to normal, people have started stepping out which poses even a greater risk for the lives of people,” the elderly Sanjay Bhatt said.

“Every evening there are several groups of people on the roadside. We haven’t seen any policemen or authorities coming to check in our area if the rules are being followed or not. The government should educate people about the sensitivity of the situation,” he said.

The city's poor, however, are reportedly pleased that, despite a decrease in work, they will again be able to at least acquire basic needs, something that they have not been able to do for the last two months.

“It feels really happy to be back on the road and working again. Only we know how we have managed to live during the lockdown. We are poor people. No one tells us the rules or regulations. Wearing a mask is all I know. If we get two passengers we will have to take them for money,” said Shambu, a rickshaw puller.

Asked about disinfecting vehicles before every ride, as required, auto-rickshaw driver Manoj said it would be better to have a cloth handy and simply clean the seat after every ride. But he had other concerns. “We have hardly been able to earn anything from the last two months. Now, we can only drive with one passenger. How will we buy disinfectants, sanitisers and all? But I have a soap with which I keep washing my hands every now and then.”

Asked about these public concerns, Delhi government spokesperson Ghanshyam Kaushik said it is the duty of local administrations and police to oversee the implementation of the rules, to ensure no violation of guidelines suggested by the government.

A senior police officer in the Delhi police claimed that they are working day-and-night to check that rules and regulations implemented by the government are being followed.

“We are doing our best to make sure that the guidelines are followed while, at the same time, it is impossible to be present everywhere. People themselves will have to ensure some of these guidelines,” the police officer avowed, requesting anonymity.

Meanwhile, per the health department of the Delhi government, as many as 11,659 positive COVID-19 cases have been reported and 194 people have died in the national capital due to the infectious virus.