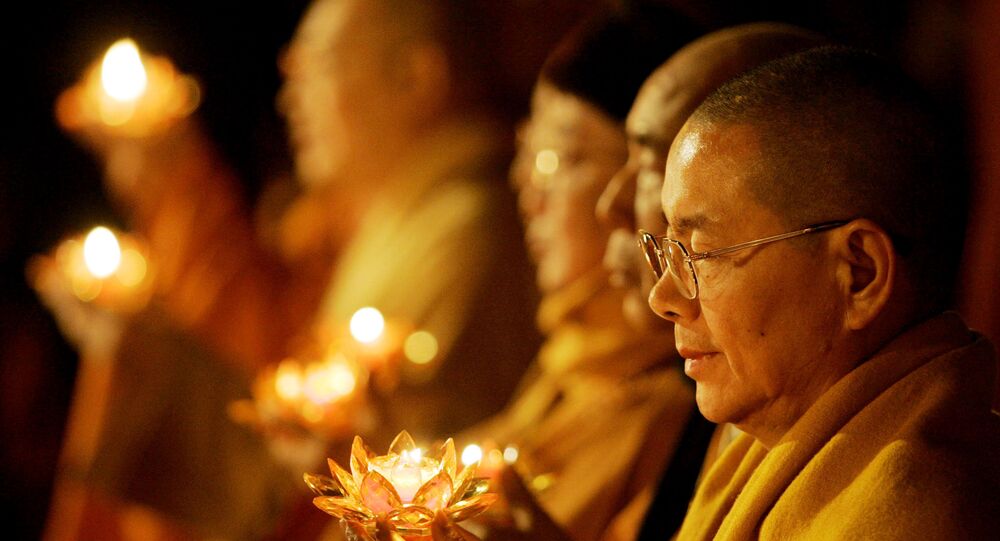 New Delhi (Sputnik): Last week, the Bihar government directed all Buddhist temples, monasteries, and institutions in the village of Bodhgaya be turned into quarantine centres for Indian nationals arriving from abroad. The Gaya International Airport will receive at least six Vande Bharat mission flights between 18 May and 24 May.

A Delhi-based rights body has sought Prime Minister Narendra Modi’s intervention to ensure the safety of Buddhist monks, caretakers, and devotees in the state of Bihar, suggesting it may help avoid a possible diplomatic embarrassment.

Bodhgaya is the holy of holies for Buddhists who visit it from all over the world. A large number of foreign monks and devotees already reside there.

The Rights & Risks Analysis Group (RRAG), which conducts risks analysis to prevent violations of human rights and fundamental freedoms, has conveyed to Prime Minister Modi that directions from the Bihar government to place returnees under quarantine at these places in Bodhgaya puts the monks and others at risk of being infected by COVID-19.

Acquiring the Buddhist monasteries and turning them into quarantine centres would have made sense if they were empty. However, all the monasteries contain resident Indian and foreign Buddhist monks, caretakers and devotees, a top official from the group said.

“In exceptional cases, a few rooms in a temple may not be occupied but all other rooms are occupied. As everything is in a compound of the temple, there is no possibility for ensuring social distancing and other safety protocols", said RRAG’s Director Suhas Chakma in an official communique.

Buddhist monasteries often operate with a single kitchen, extremely inadequate sanitation services and cleaning required for quarantine, Chakma said, adding that they do not have any housekeeping services as required under the Guidelines for Quarantine Facilities from the federal Ministry of Health and Family Welfare.

Chakma said most of the monasteries listed by the state authorities as quarantine centres have few rooms. They are already filled by more than 2,000 devotees and monks, therefore, quarantining the returnees, believed to have been exposed to the infection, “amounts to putting the resident monks at a serious risk of being infected, thereby defeating the very purpose of quarantine”.

In a memorandum to Bihar State Chief Nitish Kumar, on Saturday (16 May), the orders from the state government were opposed by the International Buddhist Council, the apex body of all the Buddhist monasteries and institutions at Bodhgaya.

Chakma said the decision to turn these monasteries, which are already inhabited by monks, caretakers, and devotees is simply illogical. He said “If a COVID-19 patient can be quarantined in a Buddhist temple with four rooms where people are already there, no reason as to why the same person cannot be quarantined in his/her house".

“If any of the foreign national monks are infected, obviously, their diplomatic missions shall have to be notified by the Ministry of External Affairs. India must avoid the diplomatic embarrassment to having to inform the concerned foreign diplomatic missions that the monks of their nationality have been infected by turning the monasteries into quarantine centres", Chakma warned.

The government of India has launched a special mission "Vande Bharat" to bring back home stranded Indian nationals from other countries. According to the government, the second phase of the mission began on Saturday and a total of 149 flights will operate to bring back Indians from as many as 40 countries.