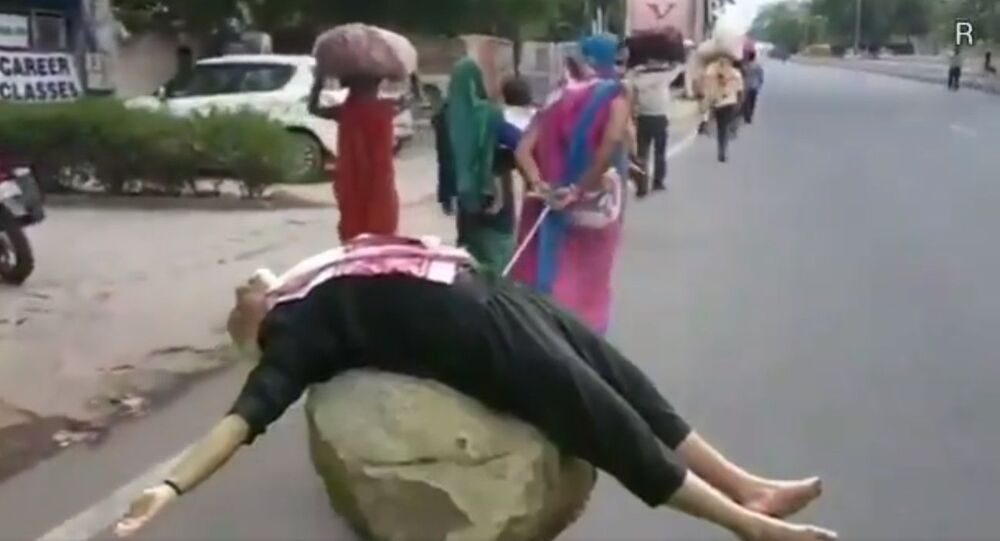 New Delhi (Sputnik): Although the Indian prime minister earned accolades worldwide for declaring an early lockdown in March to contain the spread of the virus, the provision has had an unintended impact – depriving migrants of their livelihood. As a result, thousands have undertaken a painful journey on foot to their hometowns.

India's Prime Minister Narendra Modi's famous "yogic-pose" has been photoshopped into a migrant family's video that went viral on Thursday.

The original clip that narrates the painful journey of migrant labourers towards their hometown on foot showed a mother pulling a trolley bag while her kid slept on it due to exhaustion.

In a satirical move, the kid has been replaced and photoshopped with Modi's famous yoga pose, which he was witnessed doing publicly on International Yoga Day. The edited video is now going viral on Twitter, with a section of netizens trolling the prime minister. The clip has garnered 34.2K views.

​The only question that seems to be asked is: "Who did this?" Tweeples have infinite answers to this question along with their sarcastic comments about the video. While some said the clip is photoshopped by someone who initially had faith in Modi but eventually lost it, others are simply calling him/her a genius.

May be frustrated bhakt after knowing he was wrong believing modiji 😂

Those who make this #video.. really he was a #genius 😂😂

Too heavy for all of us to carry this burden

This one cracked me up!😂

blaming modi ji for everything is a convenient scapegoat. i like modi ji. there are many highly corrupt crooks in the govt. controlling him. his hands are tied.

😷😷
Twitter is best place for comedy, scarasm,creativity, awareness & to keep updated.
In lock down this is my best time pass.

Disadvantage : This is an addiction

​However, some said that it's wrong to malign the image of the "nation" and accused the opposition Congress party of photoshopping the video.

Shame on scamgress to maline the image of nation

With these type of tweets Cong thought they will win 2019 elections and people's heart, they won neither.

Thousands of migrant labourers set off on a foot journey towards their hometowns in other states of India when Prime Minister Modi announced a nationwide lockdown on 24 March. While the Indian government has now arranged special trains for these labourers, many claim that they are unable avail the facility and therefore have decided to walk back to their homes.

The third phase of the lockdown is scheduled to end on 17 May. However, Prime Minister Modi has indicated that it may be followed by lockdown 4.0 with a completely new set of guidelines, the details of which are yet to be announced.