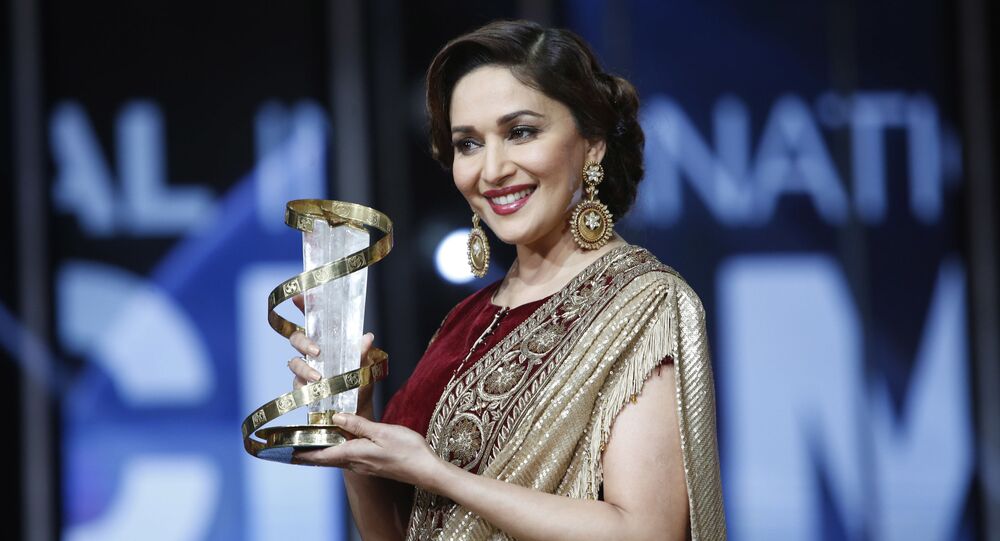 New Delhi (Sputnik): Every once in a while, a magic-box of talent is discovered somewhere in the world which brings about a revolution. India received one such shining silver screen jewel in 1984 – when a curly haired, doe-eyed 17-year-old girl called Madhuri Dixit made her debut in the film industry.

Little did people know in the 1980s that a microbiology student-turned-actress, Madhuri Dixit, would go on to become an inspiration for millions, with her hard work, acting and, of course, dancing. In her lustrous career spanning over three decades, the trained classical Indian dancer has successfully established herself as the “dance queen” in Bollywood.

The public happily sighs, every time Madhuri emotes the lyrics of any song, only using her eyes.

A mother, a wife, a dancing diva, and a silver-screen beauty to every B-town superstar, from Shah Rukh Khan to Ranbir Kapoor, it is Madhuri who gets the heart of every Indian going "dhak dhak dhak" and on her birthday, social media is “dancing” to her tunes on Friday in India.

Indo-Canadian comedian Lily Singh captured the essence of Madhuri fans, when she posted a video of herself dancing to a remixed mash-up of famous songs the actress gave life to on the silver screen.

In honour of my first ever idol, happy birthday @MadhuriDixit. Thank you for helping me get ready for the past 30 years. You’re incredible. ❤️#HappyBirthdayMadhuriDixit

​Lily was joined by hundreds of thousands of fans who poured out tributes and love for their “dancing idol”. #HappyBirthdayMadhuriDixit is trending heavily on Twitter in India. Videos of the multiple award-winning actress are also gracing social media feeds in the country today. Her fans swear, “it's impossible not to fall in love with her, once you’ve looked at her". Basically, everybody’s dancing as a tribute to the iconic actress.

Its impossible to look at her and not falling love with her💕💕💕 pic.twitter.com/Q8WdZkPYZQ

Happy Birthday to the beautiful & graceful Madhuri Dixit. 💕
She is surely the epitome of dance in India and her expressions are just to die for, Simply Wow!@MadhuriDixit
.
.
.#Madhuri #MadhuriDixit #Dance#HBDMadhuriDixit #Bollywood#HappyBirthdayMadhuriDixit#MadhuriDixitNene pic.twitter.com/w8Z4hrgEQ6

​Bollywood recently lost two of its most loved actors, Irrfan Khan and Rishi Kapoor. The grief, which felt like a "personal loss" to a lot of Indians has put them in touch with their emotions, especially concerning Bollywood stars, with whom India comes together, laughs, cries and in a way grows up.

Hence, fans are making sure that Madhuri's birthday is a total blast, at least on social media. Otherwise, her house in Mumbai would have been surrounded by thousands of fans, lining up just to catch a glimpse of the "dancing diva".

The actress, who turned 52 this year has been part of at least 70 films and was awarded India’s fourth highest civilian honour, the Padma Shri back in 2008. Tezaab, Devdas, Dil Toh Pagal Hai, Saajan and many others are iconic Hindi movies, with songs, dialogue, and dance scenes that are still repeated by youngsters in India.

Recently, when Bollywood joined hands with Hollywood and organised India’s biggest online fundraiser called “I for India”, Madhuri teamed up with her son and instead of dancing, sang an Ed Sheeran song – which totally wooed her fans into more love for the multi-talented superstar.