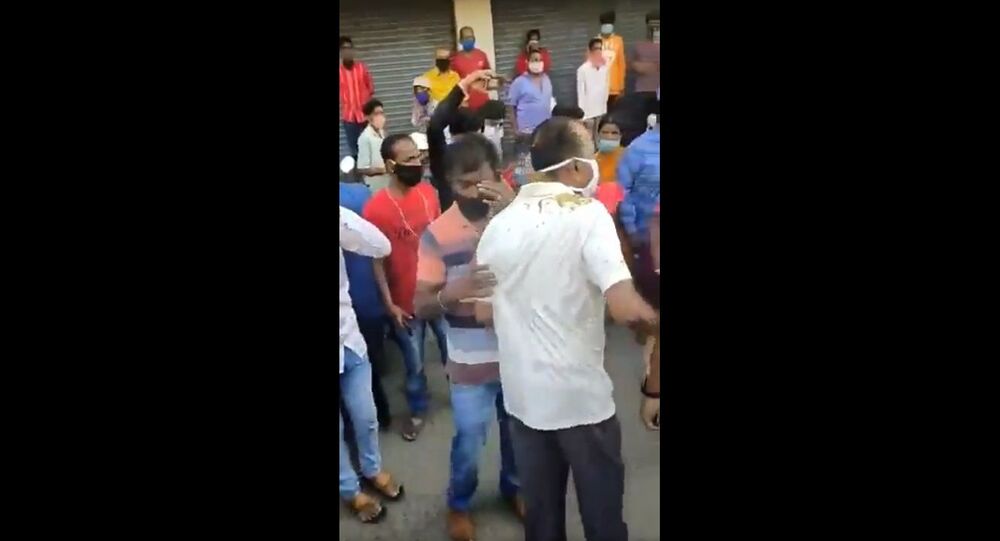 New Delhi (Sputnik): The incident occurred in the wake of some lockdown restrictions being relaxed. Some vendors are being allocated particular sites to ensure social distancing amid the Covid-19 pandemic.

A civic body lawmaker’s husband was manhandled and had cow dung thrown at him while he inspected vegetable vendors in Bengaluru.

According to the police, the local civic body representative had gone to inspect the area. However, while he was talking to the vendors things turned ugly and some local people manhandled the husband of Prathibha Dhanaraj, who represents Dharmaraya Swamy Temple ward in Bengaluru.

"Initially, there was a quarrel between them. But later it turned ugly and some attacked him with cow dung. Our team reached the spot and dispersed the crowd," said a senior police officer at Kalasipalayam Police Station.

A video of the incident shows, the politician's husband conversing with the vendors when someone from the crowd throws cow dung at him.

Ruckus at Kalasipalya #Bangalore. Street vendors defy #BBMP and #Health officials when they asked them to close shops #COVID19 . Instead they threw cow dung at them. pic.twitter.com/DhQTnvQU4W

"Following several complaints, we had decided to report the matter to the authorities keeping in mind the spread of COVID-19. The officials were going to visit the place for inspection. My husband too had reached the venue before me. When I reached they had already attacked my husband," Prathibha Dhanaraj told Sputnik.

She added that she had made a complaint and would also be filing a defamation case.

Police said they have received the complaint and were looking into the matter. "Around 10 miscreants have been taken into custody for questioning," police said.