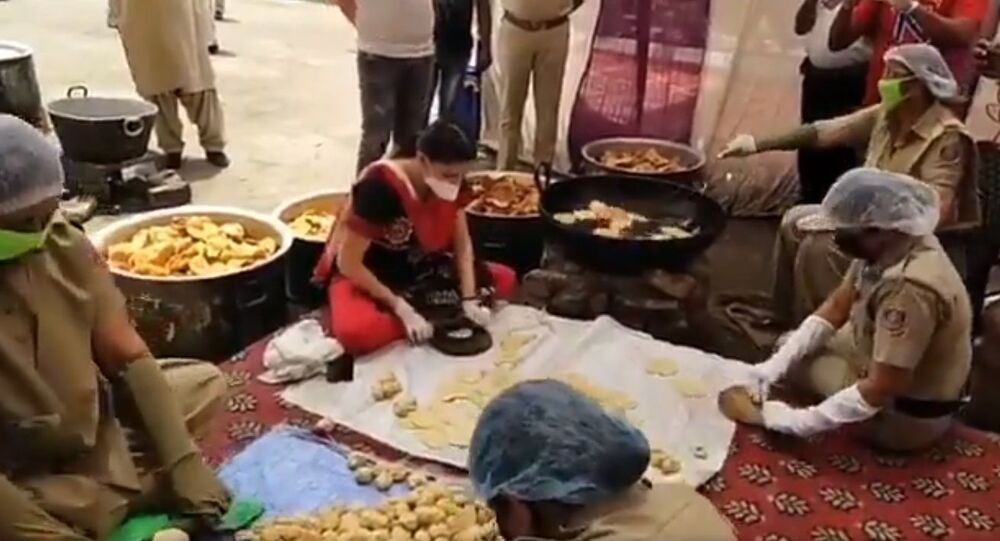 New Delhi (Sputnik): India is currently in the third phase of the lockdown since it was announced on 24 March by Prime Minister Narendra Modi in a bid to combat COVID-19. Celebrities, sports personalities and several others are coming forward to help the needy during the pandemic.

Widely known for setting the stage on fire in India with her dancing moves and singing, Sapna Chaudhary has come forward to help Delhi Police staff in preparing food for the needy.

According to the Delhi Police, the Haryanavi folk dancer and Singer reached the Najafgarh police station in Dwarka district, which is engaged in cooking food.

In the video, Sapna can be seen rolling 'Pooris' (deep-fat fried bread) with all the safety measures like gloves and mask on. Several police officials can balso be seen around her preparing food.

​Police stated that Sapna also interacted with women cops and motivated them.

“The female officials were also appreciated for their constant service to the public during the pandemic as they have been working shoulder to shoulder with their counterparts,” a senior police officer posted at Dwarka district said.

The Haryanavi Singer-Dancer is all set to hold a ‘Positivity Concert’ on 15 May. She has kept a price for people to join the concert and the money collected will be donated to the government's PM-Cares relief fund.

Sapna is popular among the masses for her dancing moves and singing. She has over 2.3 million followers on Instagram alone.