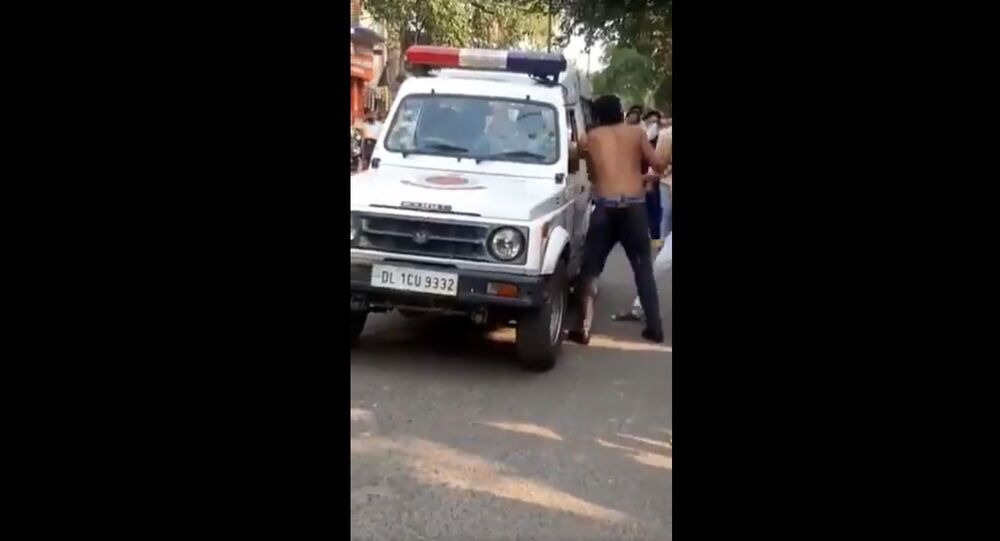 New Delhi (Sputnik): After a month-long dry spell that came along with the lockdown, the Indian government has allowed the nationwide sale of alcohol as per the partial relaxation offered due to economic reasons. Therefore, people who are buying alcohol are being termed economic warriors.

A drunk man allegedly broke the windshield of a police vehicle with his fist and engaged in an altercation with officials in East Delhi's Kalyanpuri, law enforcement said on Saturday.

A video of the incident, which took place on Friday, shows the inebriated man blocking the path of the vehicle and banging his fist on the bonnet and the windshield of the police jeep, compelling the official to step out. The crowd that gathered at the spot also tried to stop the accused; however, the shirtless man refused to budge and stood in front of the vehicle.

​Deputy Commissioner of Police (East Delhi) Jasmeet Singh informed the media that the man, identified as Harkesh, has been arrested by the police under the Damage to Public Property Act and has been slapped with other sections of the Indian Penal Code (IPC), which include Sections 186 - obstructing public servant in discharge of public functions; and 353 - assault or criminal force to deter public servant from discharge of his duty.

The federal government on 5 May allowed the nationwide sale of alcohol during India's third phase of lockdown, which is supposed to continue until 17 May. The move has led to large crowds flocking to liquor stores and flouting social distancing norms, prompting appeals by the public and India's top court to shut the stores or consider online delivery of booze.

States owe a large chunk of their tax collection to the sale of liquor, which amounts to nearly $26.66 billion across the nation.