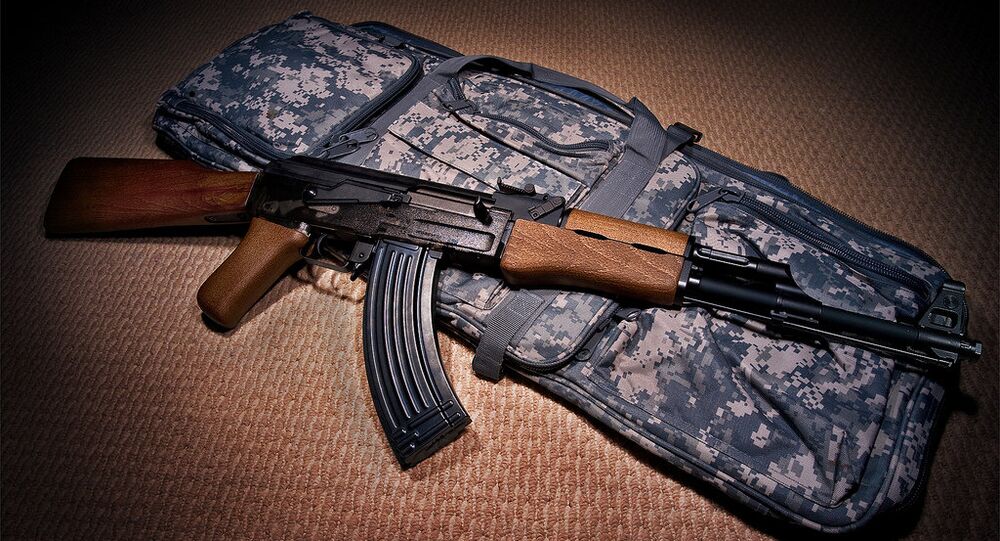 New Delhi (Sputnik): Naxals are followers of communist Mao Zedong. The rebel group is the largest one in India and was formed with the initial aim of distributing land equally to the landless by overthrowing the elected government in an armed struggle.

Weapons, including one AK 47, were seized after the end of a joint operation by the 27 Battalion Indo-Tibetan Border Police (ITBP) and Chhattisgarh Police, in which a police officer lost his life and four Naxals, including two women, were shot down.
The battle took place in Manpur in the Rajnandgaon district of India's tribal state of Chhattisgarh. The video shows the weapons, the AK 47 and self-loading rifles (SLR) and other accesories obtained from the rebels after the battle.

Seizure of arms including 1 AK 47 after 4 Naxals including two women killed in jungles of Manipur, Rajnandgaon, Chhattisgarh. Joint operation of 27 Battalion Indo-Tibetan Border Police (ITBP) and Chhattisgarh Police. A police Sub Inspector laid down his life in the operation pic.twitter.com/d7KR5qfo0X

​The Chhattisgarh police sub-inspector who laid down his life in the operation was officer S.K Sharma, who was also in charge of leading the battle.

According to the police officials, the encounter occurred at around 10:30 p.m. on Saturday near the Manpur police station when the team was out on an anti-Maoist operation, and added that a divisional committee member of the Communist Party of India (Maoist), banned by the Indian government, was among those who perished in the battle.

The Rajnandgaon district of India's Chhattisgarh is one of the most maoist-affected districts in the state. Others states affected by the rebel ideology include Jharkhand and Bihar.