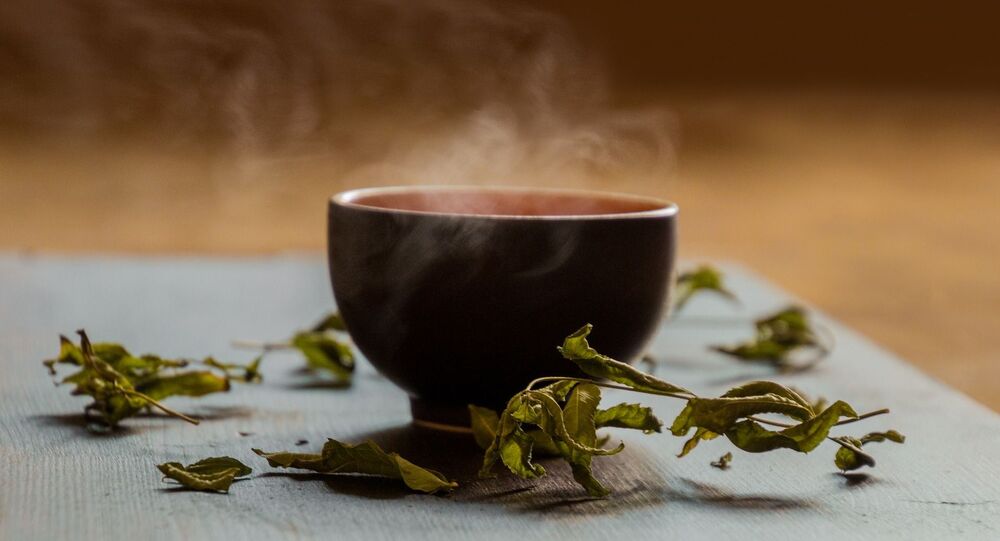 New Delhi (Sputnik): If one were ever to observe the routine life of average Indians, it would surface that in all its glorious diversities, 88 percent of households in the country connect over their love for “chai” (tea). Not to exaggerate, but India’s fondness for tea is an unadulterated love-story – as amazing as it can get.

Currently, 1.37 billion Indians are confined to their households trying to beat the stress and anxiety that have come along with the nationwide lockdown and the rapid spread of the novel coronavirus pandemic. On Friday, Indians entered the 45th day of their restricted lives.

For over a month, Indians have been joining people from around the world in complaining of restlessness, lack of productivity, and the urge to “break free” as soon as possible on social networking platforms. But what if the simple cure for all these lockdown blues is sitting in an air-tight jar right in your kitchen?

Anamika Singh, a “tea whisperer” from the home of the Dalai Lama – Dharamsala, an India mountain town in the lap of the Himalayas – spills the leaves on how our simple “chai” is actually the “elixir of life”, especially helpful in beating the lockdown blues. For 30 years, Anamika has lived and studied different varieties of teas in the Indian region of Darjeeling – also called  the "champagne of teas", Terai and Manjhee Valley – areas, which along with Assam state, are some of the most renowned tea-producing places in the world.

“India thrives on chai. It is the pulse of the nation. One of the reasons tea as a beverage is consumed so heavily here is because it relates to so many fond memories that without even realising it, chai has become India’s genetic habit”, the tea-whisperer told Sputnik, while sharing some quick brewing recipes to help relieve mental stress and anxiety.

Here is how you do it:

Every country has its own favourite brands of teas – which may be home-grown or imported. Anamika suggests that in order to quickly step out of a foul mood or negativity, a hot and steamy cup of green or black tea works like magic.

“While brewing black or green tea, add ginger, turmeric, black pepper, cinnamon and some aromatic leaves of the Tulsi plant (Holi Basil). You can grind the above together, add it into water and boil for 5 minutes. Turn off the burner, add some of your regular tea leaves to it, let it sit and infuse for three to four minutes. Strain and sip”, she said.

Apart from this simple recipe, the tea-wiz also mentioned some other combinations of herbal teas which could prove to be extremely relaxing.

“Perhaps an infusion with chamomile or lavender or lemon balm. But when I mention all of this, it is in reference to the teas that have the flower or the herb or the spice. I do not mean the ones with artificial flavours or essence. That is a complete no-no! Try beginning your day with a tea that rejuvenates you. Perhaps a cup of green tea infused with pomegranate flowers and Himalayan Tulsi”, she added. “Avoid sipping tea with sugar and milk. Allow it to have its effect on the body”.

As of now, a large chunk of the tea-drinking population in India only resorts to the milk-based brews of packaged tea leaves available at retail shops. The tea expert, however, believes that exposing the palate to newer kinds of tea leaves would totally be a game-changer in such crucial times of uneasiness and unrest.

“The tea plant has a chemical compound called L-Theanine which helps to fight anxiety, relieve stress and stimulate alpha waves in the brain. This in turn brings in calm and relaxation when one is going through stressful situations. Tea also contains caffeine but in small amounts, which when combined with L-theanine, it helps to soothe the mind, bringing focus and clarity to the brain. Add minutes of meditation with some light relaxing music and see the difference you will feel”, Anamika added.

Tea has been known to cure, heal, and even prevent many ailments. Recently, the United Planters' Association of Southern India (UPASI) said it was proven that drinking three to four cups of black tea in a day is associated with lower risk of myocardial infarction and reduced risk of stroke. It has also been proven that consuming black tea, which has Theaflavin content, reduced the growth of cancerous cells in the body.

Now, there are studies and research being conducted on the anti-viral properties of tea leaves, which could help shield people from viruses including the coronavirus. Experts are hopeful.

Elaborating on the subject, Anamika noted that sipping tea and expecting miracles to happen is “asking for a bit too much”. She, however, suggests that tea, teamed up with a healthy lifestyle, nutritious food choices, basic exercise, and 30 minutes of meditation, could be life and health-altering.

“Tea, if sipped without sugar or milk and chosen correctly – by which I mean, you know the kind of tea you have purchased, the region where it has been produced, and if it is not a pouch of potpourri, it surely has its benefits”, she said.

For people who have not been so fond of tea otherwise, this quarantine could be a time for them to explore, Anamika believes.

“Go out and pick one, maybe one that has some flowers, spices or herbs that appeal to you. It will gradually get your palate accustomed to the taste and you enjoy it. Keep in mind that it is not only the tea, but also the method of making, hence pay attention to the method of infusion. Not only is it a healthy beverage, but also one that does not feel heavy in the stomach and neither does it increase the adrenaline to the extent that it bothers. Tea is a beverage that brings out the artist, the poet, the writer, the dreamer in you”, the expert told Sputnik.

What Does India Bring To the Pot Luck of Global Tea-Parties?

Tea is an agricultural product. Hence the weather, the terrain, the type of bush, and the style of manufacturing it make it unique in its own way.

India produces a variety of black teas, which include the first flush tea, the second flush tea, and the autumn tea. The country also produces green tea, Oolong and Silver Needle Tea – which is popularly called the “White Tea”.

“So you see, it is not only the tea that goes to making the milk tea that is produced in India. We make far more”, Anamika noted.

Owing to the lockdown, the harvest of tea leaves in several major regions has been affected adversely. In 2020, India’s tea production output is expected to drop by almost nine percent. Even in India’s north-eastern tea state of Assam, producers are worried that one of the most treasured harvests of tea leaves – which were ready to be plucked – is getting destroyed.

As of now, the third consecutive phase of the nationwide lockdown is scheduled to end on 17 May; however, some cities and states have extended it until the end of May.

Currently, the total number of COVID-19 positive cases in India stands at 56,342 with 1,886 deaths recorded by the federal Ministry of Health and Family welfare. A total of 16,540 people have also been cured and discharged in India.