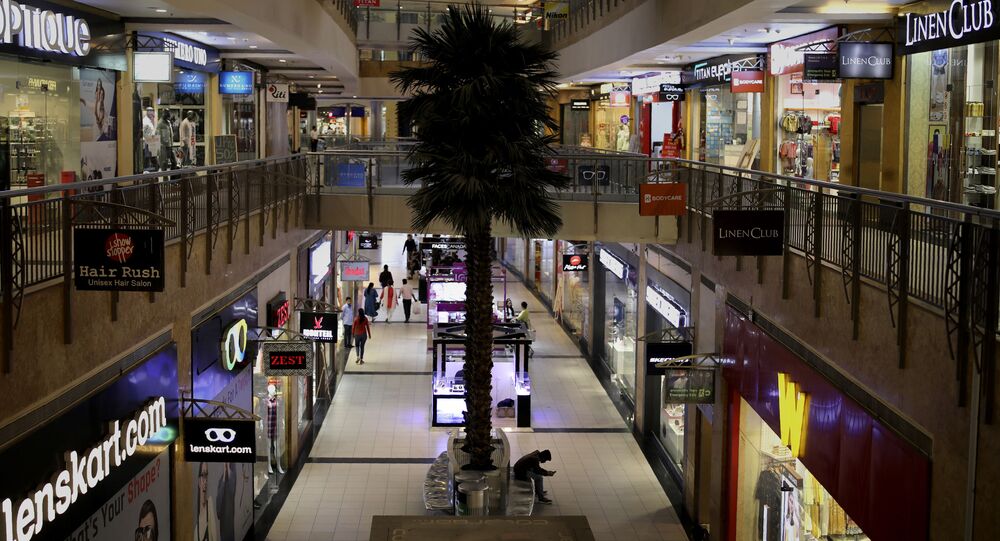 New Delhi (Sputnik): Confirmed COVID-19 cases in India have surpassed the 50,000 mark, with 3,561 new cases and 89 deaths since Wednesday. Per the Ministry of Health and Family Welfare, COVID-19 has claimed 1,783 lives as India extended its lockdown until 17 May.

Located opposite the City Centre metro station in India’s Noida, Logix Mall once used to treat those de-boarding the late evening train with its radiance and bellowing music from its terrace bars. And in order to unwind, people would throng the mall's multiple bars, retail outlets, food courts, and cinema complexes.

But the last 43 days of the country's national lockdown have changed everything. Now an eerie silence prevails there. The contagious virus, it seems, has put a spoke in the wheels of India's $150 billion organised retail industry.

Malls and branded retailers are the two key aspects of India’s retail narrative. For mall owners and organised retailers, it is a colossal fight, opine industry players and analysts, as Prime Minister Narendra Modi's government has not allowed the opening of malls amid crowding concerns. Local liquor shops, however, have been allowed to resume operation.

© CC0
$50 Billion Big Fat Indian Wedding Industry Loses its Lustre Amid COVID-19 Pandemic
The impact has been huge, with almost 600 malls spread across the country shut for over 40 days now and the prospects of their reopening in the near future are dim.

The possibility of 30 new shopping malls spanning 14 million square feet that were likely to be built this year has receded due to the pandemic.

With malls locked down, uncertainty looms large on the organised retail sector.

According to the Indian Brand Equity Foundation (IBEF), the Indian retail industry accounts for over 10 percent of the country’s Gross Domestic Product (GDP), the nation's total output of good and services, and around eight percent of employment.

So, while mall owners face the risk of losses on rent from organised retail, which itself is facing issues ranging from supply chain, to zero sales and staring at losses of about $10 billion, the entire retail ecosystem seems to be on the brink of collapse.

Putting the retail industry challenge into perspective, Govind Shrikhande, adviser and independent director told Sputnik, “The Indian retail industry has completely stopped as stores are closed due to the pandemic. The biggest challenge for organised retail is cash and working capital. Retail is not a big margin business. The earnings before interest depreciation and tax (EBIDTA) is about 6 percent in the sector and the net earnings is in the range of 2-3 percent normally. With the pandemic still raging and lockdown at malls continuing, the earnings are highly likely to go into the negative. Commercial rent liability combined with zero sales is dealing a double whammy to organised retail in the country".

© CC0
Covid-19: With Liquor Vends Reopening It's a Hic Hic Hurray Time for State Governments in India
Shrikhande, who was earlier with Shopper’s Stop – a multi-brand retail outlet from the real estate firm Raheja Group, says organised retail is a $150 billion industry in the country, $25 billion of which is the organised food sector.

"If you remove the food part, at $125 billion sales annually, the almost 45 days of lockdown must have wiped out close to $10-15 billion of the industry's value", Shrikhande added.

Rent that the retailers pay to mall owners, the supply chain, and staff salaries are the key concerns of retail brands in the country.

Thomas Varghese, business head (domestic textiles), Aditya Birla Group told Sputnik, “There is no revenue as sales is zero. The entire supply chain and value chain is disrupted. Imported cargo is lying on the ports. There are some relaxations, but movement from ports is restricted because of differences in the interpretations. Yarn producers are not producing. Fabric producers are in the red zone. We are working on a strategy to seek a three-month rent moratorium from commercial space and mall owners and renegotiate the rent with them".

Aditya Birla Group has a retail network of 2,714 brand stores across 750 cities in the country. “It is present across 18,000+ multi-brand outlets and 5,000+ point of sales in department stores across India", says the company website.

Chairman and Managing Director of Vmart, Lalit Agarwal sums up the challenge very succinctly. “We are facing challenges on liquidity, staff payment, working capital, and inventory. We are also negotiating our rentals with mall owners as profitability has come down due to the pandemic", Agarwal told Sputnik.

With organised retail in the doldrums due to the impact of the virus and all hinting at a renegotiation of the rent, there will be a ripple effect on mall owners as they provide leases for large stores.

© REUTERS / Francis Mascarenhas
Rural India Embracing Digital Transactions Amid Covid-19, Says Paytm Vice-President
ICICI Securities, in a report in mid-March, predicted that mall operators will lose about 20-25 percent of their annual revenue because of the pandemic.

“Given the evolving situation with respect to COVID-19 across India, mall operators and their tenants/retailers potentially face losses in the March-June 2020 period", the ICICI Securities report said.

“However, in the case of an improved situation from the second quarter of the current financial year onwards (July 2020), we believe that consumers will flock back to malls".

“We derive comfort on this front from the fact that Tier I malls in India have now evolved into lifestyle destinations and present a clean, safe, and easily accessible option in India’s Tier I cities", it added.

Both mall operators and retail industry representatives, however, are apprehensive about a quick rebound, as they maintain that it will take time before pre-pandemic normalcy is attained pointing to a number of factors like fear of venturing out, desirability of non-essentials, and the general impact on the economy hurting the purchasing power of the individual.

During a webinar on the issue, Harshavardhan Neotia, former president of the Federation of Indian Chamber of Commerce and Industry (FICCI) said people are scared of “contact” activity due to the fear that they may touch infected surfaces.

“The challenge is complex. Today a large part of shopping is undesirable except medicine and essentials. COVID-19 has affected the economy as well as individuals. Until money comes back into the economy, people will not feel confident to go and buy products that the malls, eateries, and multiplexes provide. Of course the first thing is to open, which has to be closely followed by other things", said Neotia.

© AFP 2020 / PUNIT PARANJPE
Covid-19: India's Banking Regulator Provides $6.7 Bln Lifeline to Mutual Funds Amid Default Fears
Varghese agrees: “Textile is under a discretionary category. The fact that we have not been able to open, means it will take a long time to get to normal. The answer to the question whether 100 percent of people will come back when the malls, retail stores open - is no. We should be thankful if we gain 60-70 percent of our operation by year's end".

China, which emerged as the epicentre of the pandemic, has witnessed a graded build up of footfall at public places, malls and retail outlets after their lockdown.

According to observations shared by the world's leading investment firm Blackstone in one webinar on Indian multi-brand retail, it was mentioned that even though 80-85 percent of restaurants and 90-95 percent of commercial assets are open in China, the footfall has seen a gradual increase. In some Chinese cities, 60 percent footfall has been attained. In India, the firm expects 80-90 percent footfall to be back by the festive season of Diwali (the biggest Indian festival) towards the end of the year.