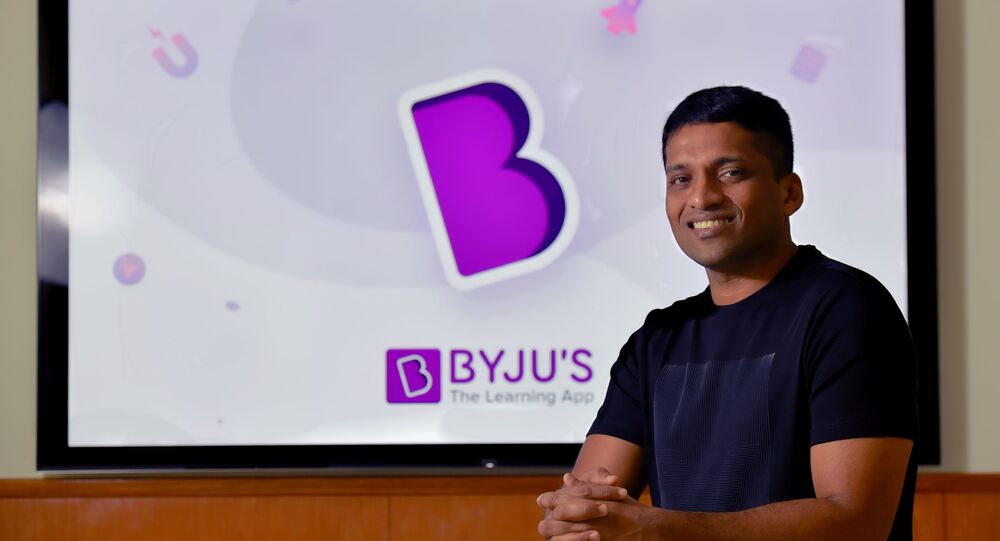 New Delhi (Sputnik): Amid the lockdown imposed due to COVID-19 in India, nearly 45 percent of Indian corporate professionals are stressed about losing their jobs in the aftermath of the pandemic, a recent survey claimed. Corporate employees in India are currently battling both lay-offs and pay-cuts.

Indian education and learning firm Byju’s, valued at $10 billion, has landed in controversy for an allegedly abusive work environment. The managers at the firm, which facilitates digital tuition facilities to school students, has been accused of harassing employees for not meeting their sale targets during the lockdown.

On Wednesday, Byju’s told Sputnik it had terminated a sales manager, part of their Jammu and Kashmir network, after recordings of him misbehaving with a junior employee were released online. In the audio, the manager can be heard making personal remarks, while using impolite and abusive language.

As obtained by @SputnikInt -- employees of India's popular education learning company, which is in talks to raise around $400 million in fresh capital at a $10 billion valuation -- is accusing the company of maintaining a toxic work culture, despite the COVID-19 situation. pic.twitter.com/VENGDPFXdu

​"Within hours of the matter coming into light, we took immediate action against the manager and he has been terminated on the same day as per our zero tolerance policy towards such behavior," said the company spokesperson, sharing a copy of the termination letter ordered against the manager in question.

​Earlier this week, Byju's workers began circulating video and audio recordings of their seniors pressurizing them over dwindling sales numbers in a questionably inappropriate language. While some recordings testified the personal remarks and abusive tones that junior level employees of the company were dealing with, some screenshots shared on Twitter and LinkedIn revealed mails exchanged over delayed salaries amid the COVID-19 situation.

I was an employee in sales department at Byjus. I have seen, faced and lived this environment.#Byjus#TortureAtByjus#ByjusTorturesEmployees

Every manager at Byjus treats his subordinates just like this. Targets and revenue are the things for which even company COO lets his team exploit the employee the maximum he can.
2/3#byjus#TortureAtByjus#ByjusTorturesEmployees@OpIndia_com @rahulroushan pic.twitter.com/rCsn4F2e9m

Each and every Byjus sales office in India has same work 'culture' and 'ethics'. Improper LOPs, illegal penalties by manager, inhumane behavior are among few things that this organization offers.
I request @LabourMinistry, @CimGOI to take strict action against the company.
3/3 pic.twitter.com/c8zzgtGiLR

On condition of anonymity, employees who work with Byju’s claim to have been forced out by the inhospitable work culture.

“For instance, in this very situation, several people have lost their jobs due to the slowdown of the economy. Companies have laid off workers, delayed and even reduced their salaries to sustain the firm in these crucial times. The packages companies like Byju’s and others offer for students, per say, usually range between $500 to $1,321 approx (INR 30,000 to INR 100,000). What are the odds that many person would spend so much money in one go? Obviously sales figures were set to go down,” a Byju’s employee told Sputnik.

In their own words, the employees at one of India’s renowned and successful startups claimed that the work environment in the company has remained “toxic”.

Even I have heard from people working at #byjus that it is the most toxic company to work for.
Can you share some more details?

​Amid the chaos, some videos and posts shared on the working conditions of Byju’s began disappearing from social media. The employees alleged that the company was coordinating the move with Twitter itself, or even asking employees on a personal level to remove and report all such posts. Byju’s has however, denied all such claims.

© CC BY-SA 3.0 / Aeroprints.com / VT-ANL Boeing 788 Air India Tail
Fearing Loss of Jobs, Staff of India's Debt-Laden National Carrier Seeks Quota Post-Privatisation
“We work, we try to make as many sales as possible. All we need is a little understanding and basic respect from our seniors. The videos online are proofs of the kind of language we are spoken to, the kind of personal remarks we are subjected to. Sometimes it gets too much to handle, especially since we cannot go out to divert our minds elsewhere due to the lockdown. We cannot resign from our jobs because the markets are already crashing, but we want to work in peace,” said another employee associated with the education and learning company.

According to a recent report by YouGov, early estimates show that the unemployment rate in urban India has soared to 30.9 percent. In addition, the United Nations has estimated that around 400 million workers in India will slip into poverty due to the pandemic.

Currently, the total number of positive COVID-19 cases has reached 49,391, with the death toll mounting to 1,694. The country has been under a nation-wide lockdown since 25 March to 17 May - which also is expected to be reviewed.