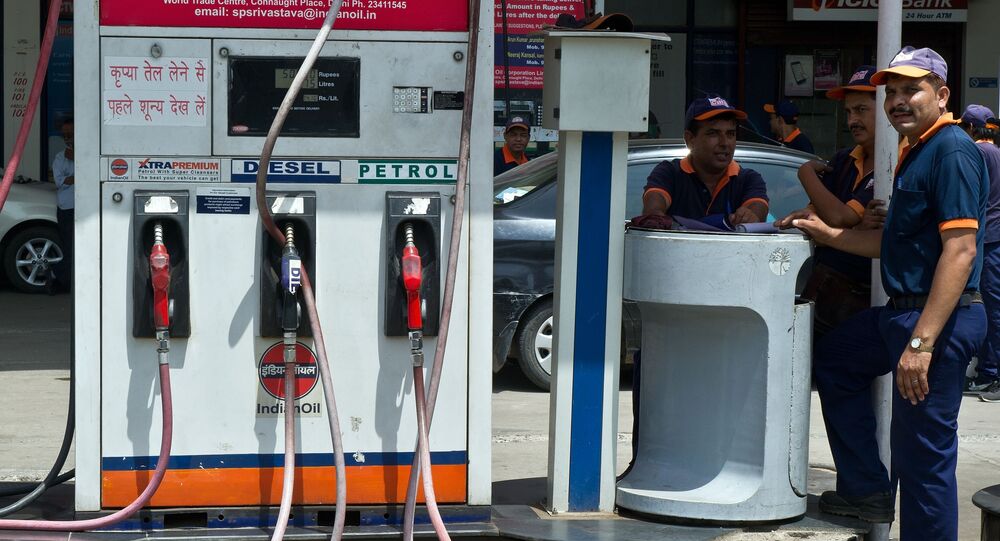 New Delhi (Sputnik): The federal government in India has relaxed the lockdown norms to permit limited commercial activity, starting 4 May.

As India’s federal government took an incremental step to outlaw commercial activities, the national capital Delhi slapped a higher value-added tax on petrol and diesel, pushing up the prices of the essential commodities. The new tax on petrol and diesel came as a bolt from the blue for Delhi residents, who are already severely strained due to the prolonged lockdown.

Delhi petrol dealers have slammed the move and said it would be a huge burden on city residents, who have been relying on personal transport in these difficult times, since no public transport was available in the country. It is also expected to lead to inflation in the price of essential commodities, added the dealers’ trade association.

With public transport closed it will be huge burden on citizens of Delhi who are using self transport in these difficult times. The massive increase in Diesel would lead to inflation of essential commodities ferried by public goods carriers.

​There have been sharp reactions among people on social media against the move: they slammed the state government for imposing an additional burden on people, as many have lost their jobs or incomes due to the lockdown.

Ppl don't have income.. many lost jobs.. can't afford to buy even essential stuffs.. and what did Kejriwal sahab do? Petrol, diesel mahanga kr do..

Big Slap on the faces of the #CoronaWarriors
The only people driving today are health workers and those who are risking their lives to maintain essential services.Petrol, diesel get costlier in Delhi, hiked by Rs 1.67 and Rs 7.10 per litre. #Petrol #coronavirusinindia

​On Monday, the state government slapped a 70 percent additional tax on liquor, a day after it decided to open liquor shops in the national capital.

Liquor to get costlier in India's national capital.

Delhi Govt decides to impose ‘special Corona tax’ which will be 70% of the Maximum Retail Price.#CoronaUpdatesInIndia@SputnikInt pic.twitter.com/jzzjLD8TLC

​The third phase of India's lockdown began on Monday (4 May), with a relaxation of restrictions ofn commercial activities. However, public transport remains unavailable, including the Delhi Metro, which has also not resumed its operations. Only personal vehicles and a limited number of taxis are on the roads, as the entirety of Delhi is in the red zone, with maximum restrictions.

As of Tuesday, the caseload of COVID-19 has reached 46,433, which includes 12,727 cured or discharged from hospitals and 1,568 deaths, according to the federal Health and Family Welfare Ministry.