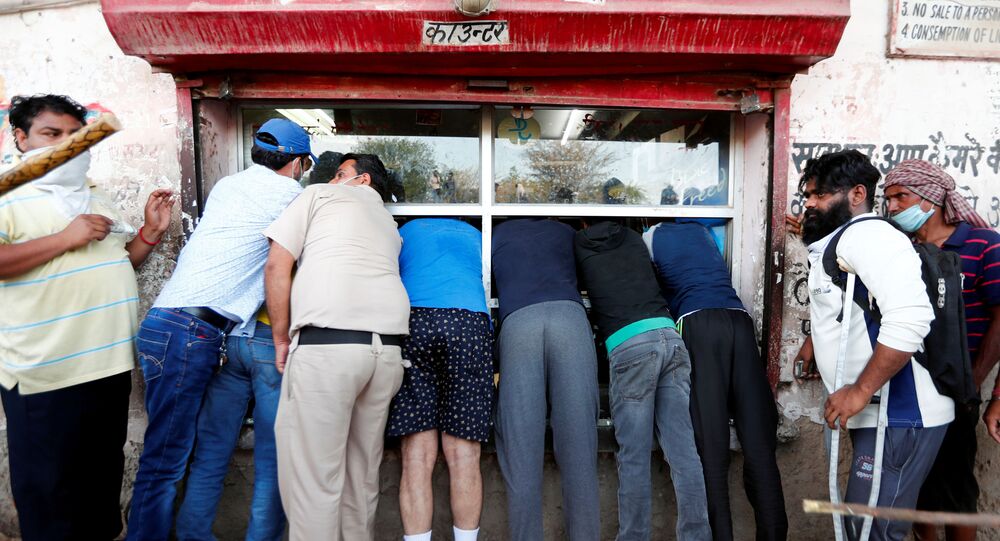 New Delhi (Sputnik): After more than a month, liquor shops were reopened in India on Monday as the government relaxed COVID-19 restrictions in safer zones. As liquor sales fetch around $25 billion in tax revenue annually for the government, the state had demanded the lifting of prohibitions on alcoholic drinks.

Throngs of people queued-up at liquor shops on Monday, the first day of the third phase of India's mandatory lockdown, defying social distancing norms to stock up alcohol. Several alcohol shops had to be shut down hours after they had re-opened in connection with the easing of the lockdown announced by Prime Minister Narendra Modi on 24 March as the officers found it difficult to control the unruly mob.

Police had to use mild force to disperse the crowd as they ignored a police warning to maintain calm and their distance.

“All liquor shops in the eastern range that were opened today have been closed as social distancing norms were flouted at those shops,” said Joint Commissioner of the Delhi Police (Eastern Range) Alok Kumar.

​Many visuals emerged from across the country showing the pent-up desperation of alcoholics. Most of the videos captured people fleeing as police charged them with batons.

The sale of alcohol is now allowed in the nation's red, orange and green zones, barring containment areas where COVID-19 cases are very high but with "certain restrictions".  Stand-alone shops may sell to buyers abiding by the minimum six-feet social distancing rule; no more than five people are allowed inside a shop at a time.

COVID-19 cases in the country already topped 42,500 with 1,300 death so far, according to the Indian health ministry.