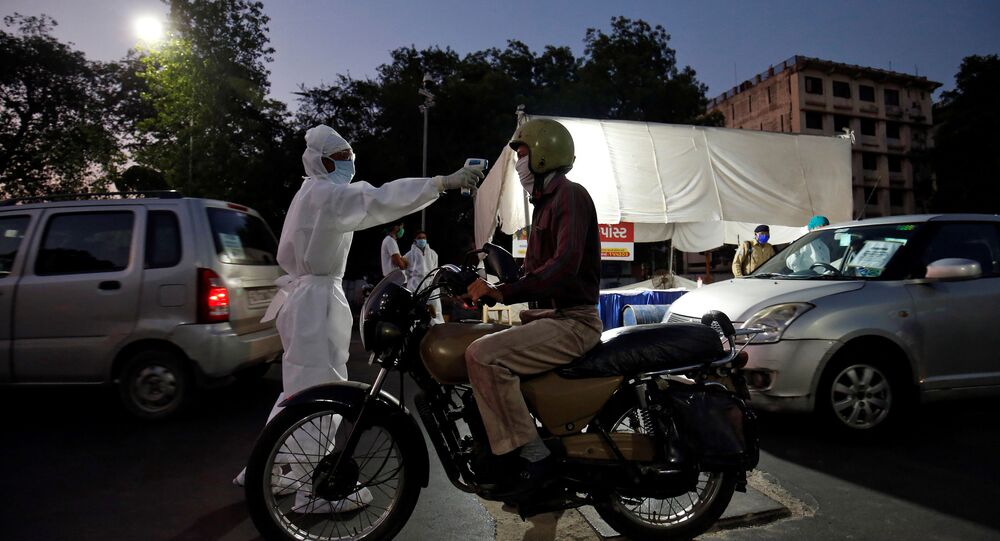 New Delhi (Sputnik): Amid the escalating cases of coronavirus in India, the largest lockdown in the world, slated to end on 3 May, has further been extended until 17 May. To distinguish COVID-19 hot spots from safer regions, India has been divided into red, orange, and green zones. The national capital, Delhi falls under the red zone.

In the latest COVID-19 test results, 122 officials from India’s largest paramilitary group, the Central Reserve Police Force (CRPF), have tested positive for the novel virus. The test results of over 100 more CRPF officials are still out, the media reported on Saturday, citing anonymous senior officials. The reports also reveal that a majority of these officials were asymptomatic.

Based in the national capital’s sealed Mayur Vihar-Phase Three area, the frontline officials are part of CRPF's 31st battalion.

The infected personnel have been quarantined in an isolation facility located in the Mandoli area of Delhi.

According to the media reports, senior CRPF officials suspect the infection in this battalion could have been caused by one of the asymptomatic officials, who could have contracted the virus from a constable in nursing assistance who joined the team after returning from leave. The family of this constable – who is now posted in Jammu and Kashmir however, tested negative for COVID-19.

The constable is suspected of not being under a strict quarantine during his leave.

Earlier this month, a “dichotomous” order was issued to check the spread of COVID-19 in CRPF battalions. Even though the general order required CRPF officials to complete a 14-day quarantine after their leave period, a separate April order allowed doctors and paramedics to resume work if they did not show any symptoms of COVID-19 after five days of quarantine.

The results of more Delhi-based CRPF officials are still waiting to be revealed.

The total number of positive COVID-19 cases in the country has reached 37,336, with 1,128 fatalities, the federal Ministry of Health and Family noted.