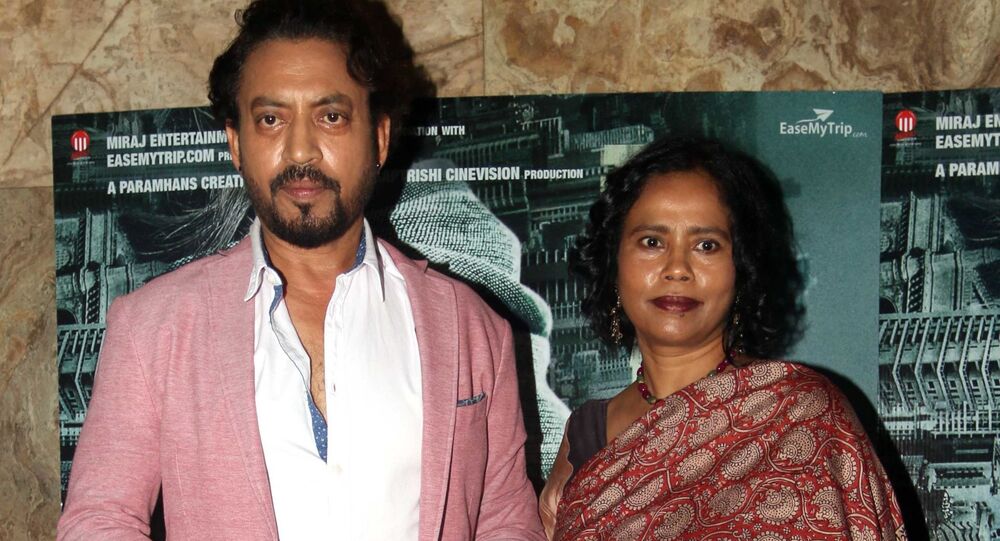 New Delhi (Sputnik): On Wednesday, the sun set on critically-acclaimed Bollywood actor Irrfan Khan who fought a furious battle with a rare neuroendocrine tumour that he was diagnosed with in 2018.

Just two days after the world of cinema suffered the irreparable loss of cherished Bollywood actor Irrfan Khan - who died after battling cancer - his wife Sutapa Sikdar has penned an emotional letter in which she also took a moment to share a piece of her personal life with him.

“The only grudge I have against him is that he has spoiled me for life. His strive for perfection doesn’t let me settle down for ordinary in anything", she said in a heartfelt letter she shared on Twitter.

In the two-page letter, she talked about what she learned from him and expressed gratitude about how the world has reacted to his death as if it was their personal loss.

From Sutapa, Babil and Ayaan... pic.twitter.com/djfdp5KxTL

​The 53-year-old actor, who went on to become the face of Bollywood in the West with major roles in such films as "Jurassic World" and Oscar-winning "Slumdog Millionaire", died after being admitted to Mumbai’s Kokilaben Dhirubhai Ambani Hospital on Wednesday.

The entire nation mourned Irrfan’s sudden death. The actor made his debut in 1988 in the movie “Salaam Bombay" and featured in more than 50 films in Bolllywood. Tributes and condolences poured in from across the world as the "Life of Pi" actor was buried on the same day he passed away.

The actor's two sons also shared what they learned from their father. Irrfan’s wife encapsulated the family’s way forward in a single sentence, “I see my little family, in a boat, with both my sons Babil and Ayaan, paddling it forward with Irrfan guiding them…”.

In a heart-warming gesture revealed in the letter, Sutapa said the family would plant Irrfan’s favourite plant, jasmine, at the place where he was laid to rest.

“Tears will flow as we will plant a raat ki rani (jasmine) tree, his favourite, to the place where you have put him to rest after a victorious journey. It takes time but it will bloom and spread and touch all the souls whom I won’t call them fans but family for years to come".