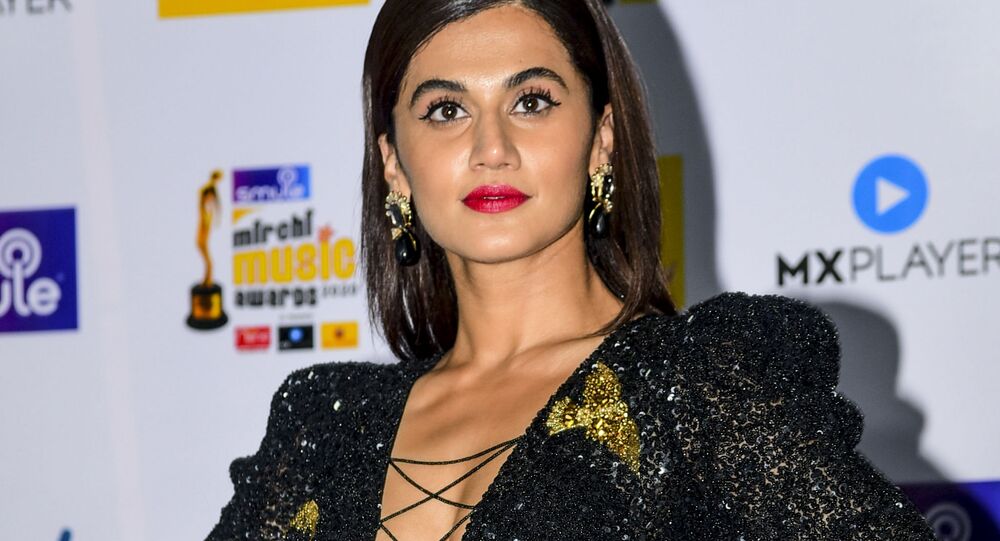 New Delhi (Sputnik): The Indian film industry, which releases almost a thousand films per year, invariably lies somewhere in the centre of every citizen's heart. These films are actually a reflection of the times, society, and the future of Indians. Actors and actresses work hard day and night to get a message across via the silver screen.

India’s curly-haired beauty Taapsee Pannu on Friday took to Instagram and revealed that during the shooting of her latest film titled “Thappad”, she was slapped seven times on the set – just to get the perfect shot.

Released earlier this year, the movie boldly titled “Thappad” – which literally translates to “slap” in English, touches upon the very sensitive subject of domestic violence. The film was unable to complete its run in cinemas due to the coronavirus-caused lockdown, but viewers are still streaming it online.

Sharing her experience of shooting the poignant “slap scene” that changes the course of a happy marriage in the film, Taapsee wrote, “It took us seven takes for this shot not because we didn’t get it right initially but because we wanted to make sure we got it in all possible ways a man can slap a woman".

According to the 32-year old actress, Anubnav Sinha, the director of the film had warned her beforehand that the slaps would be real for the authenticity and impact of the scene.

“I said I shall have it no other way", Taapsee recalled telling Sinha.

Earlier in January, when the trailer of this film was launched, #Thappad trended on Twitter for days.

The trailer gives a glimpse of the core of the story showing a young Indian couple – ruining their marriage, after the husband slaps the wife during an argument. The trailer showed Taapsee, the lead actress in the film, deciding to quit her marriage because she did not believe in compromising herself because of her husband's behaviour.

​This, however, is not the first time actors have gone out of their way to really get into their on-screen personas.

In recent times, Bollywood powerhouse Ranveer Singh had publicly confessed that he entered a “dark mental space” during the shoot for super hit period drama “Padmavat” – where he played the role of the once-upon-a-time Sultan of Delhi, Alauddin Khalji.